I’ve reached a crossroad in life where I’ve realized that I am rapidly approaching my thirties and I’m not really sure where my life is going. It’s actually scary as crap. Having grown up in the South where a growing majority of friends have embarked on the next phase in their lives…marriage, owning a home, 2.2 kids…and here I’m living in California (where housing prices are slightly out of my range in the places I would buy) and the average person doesn’t seem to consider marriage until their mid-thirties. I don’t even necessarily want to be married right now, but as March 7 rapidly approaches, I’m constantly questioning what I’m doing with my life.

I traveled to Panama in the summer of 2011 and it was the first international trip I had taken since 2004 (not including driving down to Mexico). It was the most amazing two weeks and it made me realize there are a lot of places I want to see before I settle down and it becomes harder to just get away and jet off to another country. I have zero responsibilities and I suppose there’s something nice about that. Albeit, I can’t deny that there are moments when I wish the opposite were true. One late night in Bocas del Toro, my best friend Danielle and I hatched a plan. Let me back track for a minute (I suppose if I keep this blog up, I’ll back track often. Close friends of mine have learned to love, or at least tolerate this story telling trait of mine…I just think details are important!) In the fall of 2010, I was traveling back and forth to Houston weekly for a contract job and found myself wandering through the airport Borders looking at books to read on the plane. I came across this book, The Lost Girls, and in the first chapter, I could immediately relate (check out their blog to hear their story). Back to our late night in Bocas…Danielle (who had also read the book) and I began talking about taking a similar trip. Quitting our jobs and traveling the world, no big deal, right?! We talked about places we wanted to travel and things we wanted to do and ‘the trip’ just took on a life of its own. I was so in love with everything about the Panama trip, I couldn’t wait to explore more of the world!

As we started to settle back into our regular lives, all we could talk about was Panama and how amazing it was and slowly it came back to the Around the World trip idea. We talked endlessly about the pros and cons and finally the time came to float the idea by our parents. As you can probably guess, these conversations really didn’t go that well. Danielle’s mom blamed me for this crazy idea and my mom blamed Danielle. This realization actually made us die laughing. Each parent took it a different way and EVENTUALLY they all came to accept the fact that if this is what we wanted to do, then there really isn’t a reason why we shouldn’t do it at this point in our lives. (In some cases, eventually took months, and until we book the ticket and they’re forced to get on board, that resolution could perhaps be fleeting…) During August & September, we were both about 70/30 (or 30/70 depending if it was a day when the idea seemed utterly insane) about taking this trip. We had planned a trip to Nicaragua for Thanksgiving with some other friends and we decided that was our decision deadline.

Come the beginning of October, I started dating someone and it was the first real relationship I’ve had since living in California. When our Nicaragua trip rolled around, I was more conflicted than ever. The RTW trip was my dream trip that I may never be able to go on again, yet, finding a person who you not only really enjoy spending time with but has enough check marks on the ‘potential long term’ list to make it worth while to explore the relationship is tricky. F-ing tricky!!! Once in Nicaragua we talked about our trip with some Americans who had moved to San Juan del Sur to open a hostel and their reaction was…”Yes, you’re doing this trip. Promise us you’ll do this!” but I had shifted to 50/50 and Danielle was probably around 60/40. We extended our deadline till the end of the year. I suppose fate intervened in December, because said relationship ended. It seemed to me that my life was unraveling rapidly because at the same time I discovered I wasn’t truly happy in my job. Uff. Wouldn’t it be so much easier to rewind to the simpler days in college where my biggest decision of the day was whether or not I was going to class. Anyways…over the holidays, Danielle and I talked a lot about the trip and not only did we discover we were both now at 90/10, but we started planning a route and got a quote on a RTW ticket. We consulted with friends who had lived abroad in New Zealand, Australia and South America and both said we have to do this and we will never regret going. Our loose itinerary was shaping up to look like: New Zealand, Australia, Bali, Vietnam, Laos, Thailand, India, Tanzania, South Africa, Argentina, Bolivia (the Gringo Trail…parts of Chile, Peru and Ecuador) making our way to Colombia, sail to Panama, spend some time in Bocas, San Juan del Sur Nicaragua and end the trip in Costa Rica. Depart right after July 4, 2012. Eight to ten months. Approximately $5,400 for the ticket. Crazy…

We decided that we were going to keep it to ourselves until we purchased the RTW ticket, but we discovered quickly (I guess we should have known) that we both have big mouths! We found ourselves talking about it with more and more people, but the more we talked to friends (in all walks of life…married with kids, married with no kids, single, in a relationship, etc) the more they reaffirmed that we have to go on this trip and it will be an experience of a lifetime. Some of our friends even promised to come join us (and we’re holding them all to that!!). I found you can tell immediately someone who understands the importance of travel and self discovery when you tell them the price of the RTW ticket. The folks who say, that’s nothing!, truly understand what you want to do and are perhaps kindred spirits.

Thinking about going on a trip like this used to give me really bad anxiety. My fears were that I would be missing out on something or be forgotten about but the more I thought about those things, I realized it was beyond silly. The same thing happens from year to year and when I got back, it’s likely that my friends will be living the same lives as when I left. Second, as as friend of mine put it, “a fruit fly has a longer memory than 8-10 months, no one will forget about you.” Plus, those people who are truly friends wouldn’t forget you. If anything, they’ll come join you, or at least want to have a beer upon your return and hear all about the trip. I’m newly obsessed with Pinterest and discovered a quote that seemed to very succinctly describe my feelings about the trip: “If your dreams don’t scare you, they’re not big enough.” This is my dream trip and it scares the crap out of me.

That’s where we are now. Still just over a month out from a potential RTW ticket purchase, but moving forward. The main goals of the trip are to volunteer, learn Spanish and discover the world. You never know who you will meet or how your life will change with a trip like this, but right now, I hope to develop a little more perspective and global experience. As Mr. Twain wisely said, “Twenty years from now you will be more disappointed by the things that you didn’t do than by the ones you did. So throw off the bowlines. Sail away from the safe harbor. Catch the trade winds. Explore. Dream. Discover.” 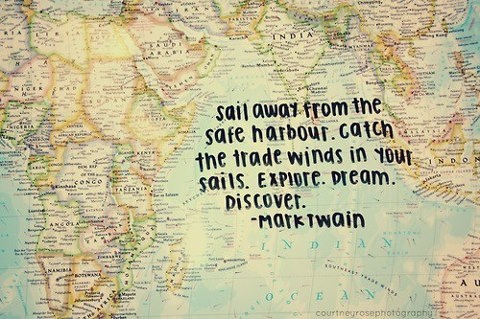