On Sunday we arrived in Rainbow Beach, which is basically one of three spots you go to in order to get to Fraser Island. We got oriented, had a burger and beer, hired (rented) our sleeping bags, watched the Olympics (our tiiiinny hostel had all the Foxtel Olympic channels, who knew!?) and went to bed.

Monday morning, we packed our small bags into the 4WD vehicle we would be driving around Fraser Island in with our ‘family’ for the next three days and hit the road! Dinky the Dingo (the Dinkster), as our car came to be known, was quite the car and he did a helluva good job navigating the sandy terrain. We had to load all the cars onto a barge and cross over to Fraser Island. Fraser Island is the largest sand island in the world. From there, we drove to the general store area of the island and stopped to eat our first meal as a family. They had packed all of our food per family in a cooler and two crates. For lunch we just had sandwiches and an apple, which a. had me buying candy at the general store and b. concerned about my hunger for the next few days. After lunch, we headed to Lake McKenzie, one of the perched lakes (a lake sitting on top of compact sand) on Fraser Island. It was quite scenic and had posts lining the beach area, which to Danielle and I of course suggests photo shoot with lots and lots of one legged tricks and poses (leading to some falling in the lake). 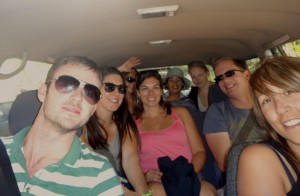 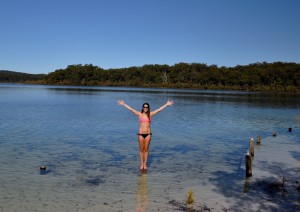 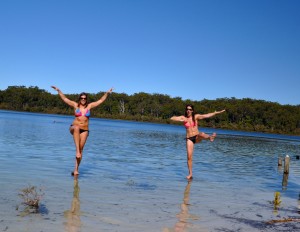 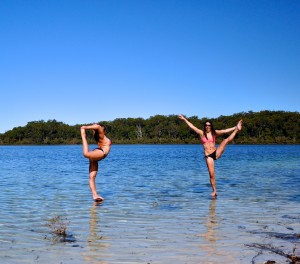 After the lake, we drove along the beach and I took one million photos out of the car of the sunset on the ocean. I couldn’t get enough of the pinks and purples and blues and (more) pinks of the sky!! 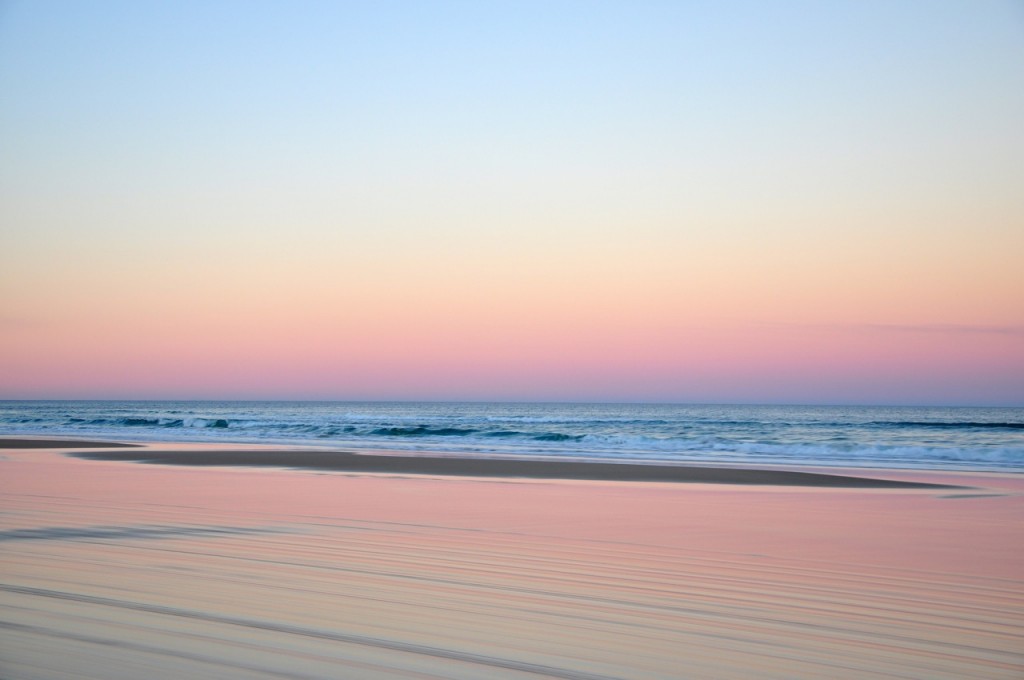 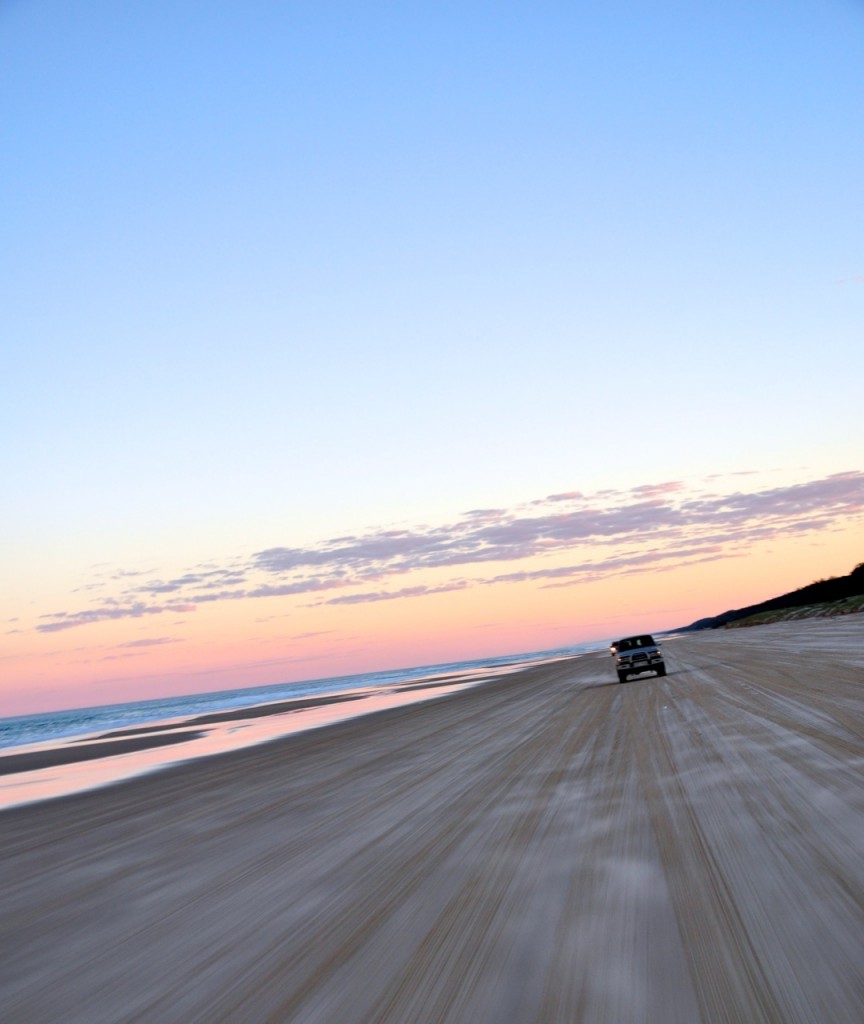 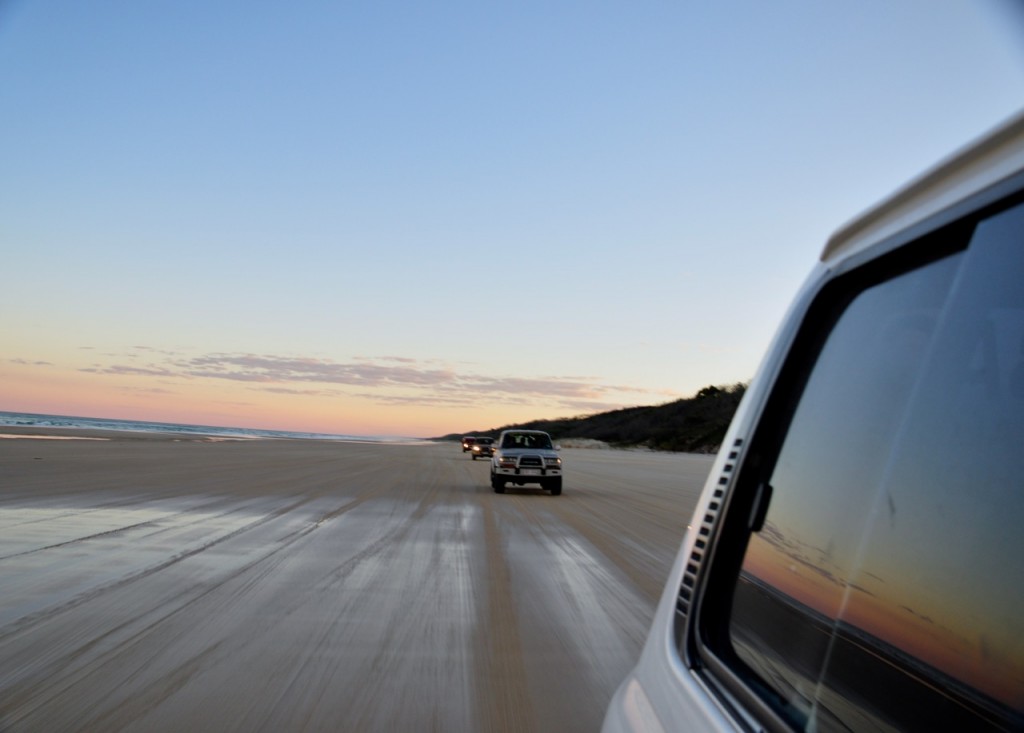 Once at our site, we first got ourselves set up with a dingo buddy (and a stick) as we were not to go anywhere without them at night (apparently a few weeks ago some kid, on the goon, wandered off alone and woke up on the beach with dingoes eating at him…yikes!!), then we got down to the business of fixing dinner. Our meal sheet suggested potato salad, but we opted to sauté our onions and cook the potatoes with them in the skillet. It went excellently with our steaks and salad. Dinner was delicious and gave me restored faith in our food quantities. I also think all of the other families were jealous of our ingenuity of going off the grid and not making the potato salad. Night one at the campsite was also full of a few firsts…a lot of folks tried their first flabongos and Danielle and I had our first taste of the GOON!!! The goonie juice (as some call it) is just cheap, boxed wine. I have no idea why they call it goon. Probably because it is $12 for 4.4L and is like 11% alcohol content so people act like goons on it. We have learned however, that fruity lexia is really the only type of goon to drink. The sweet red is, unfortunately, not good! We held out on the goon for so long, but a 24 pack of beer or cider would have been $45. Soooo really, it’s just a numbers game. And the goon wins every time. I learned that the hard way when a bit of goon spilt on my iPod and took it down. 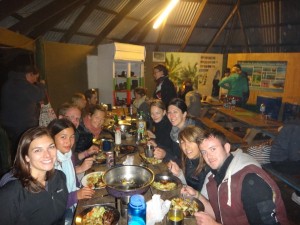 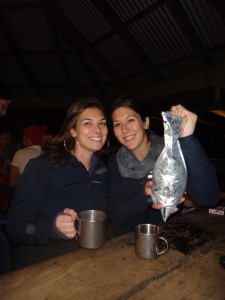 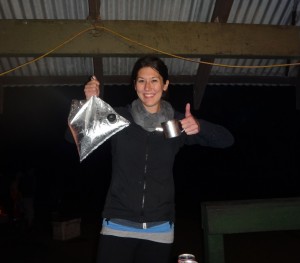 On our second morning, after scrambled eggs and toast, we headed out to Eli Creek, a fresh water creek flowing into the ocean. Really, not a lot going on, but a nice place to relax on the beach and read. Oh, the rice we were having for dinner was placed on our dashboard for the day, full sun, iPod shoved inside ready for a miracle. Following the Eli Creek, we headed over to the shipwreck. The shipwreck was originally a Scottish ship used on the English Channel. It came to Australia and New Zealand during WWI to be used as a medical ship. In 1935 the Japanese were taking it back to Japan to use the metal and got caught in a cyclone off Fraser Island. The ship broke free and landed on Fraser Island, where it has been ever since. Basically a spot for group pyramids, jumping and every other obnoxious photo opp possible!! We stopped at camp for lunch and then headed over to Indian Head where we hiked up to some magnificent views and got to watch seals, sharks, turtles, stingrays and even a whale swim around in the ocean. The Champagne Pools were our last stop of the day…lots of fun lounging on the beach, swimming and more silly photos. Our dinner that nice was a chicken and veggie stir fry over rice. Once again delicious! Anddd…the rice did its trick and my iPod came back to life!! iPod:.75 Goon: .25 (still a few glitches, but whatever) 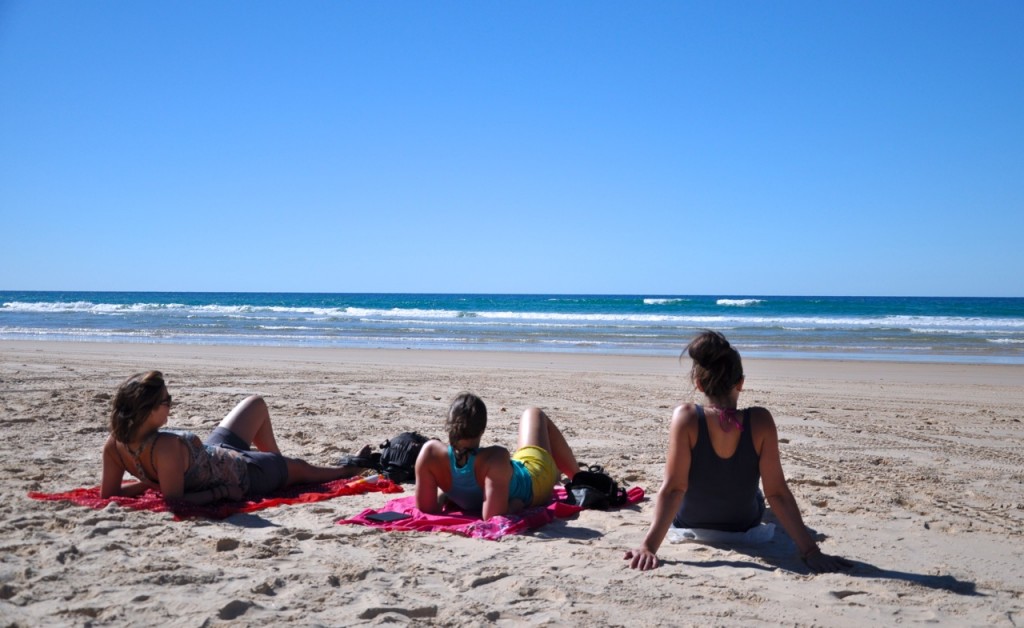 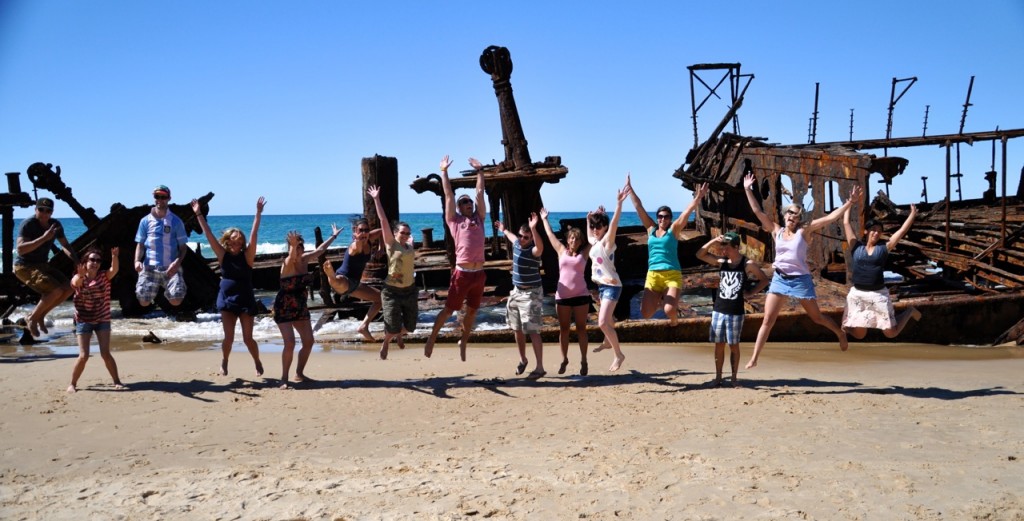 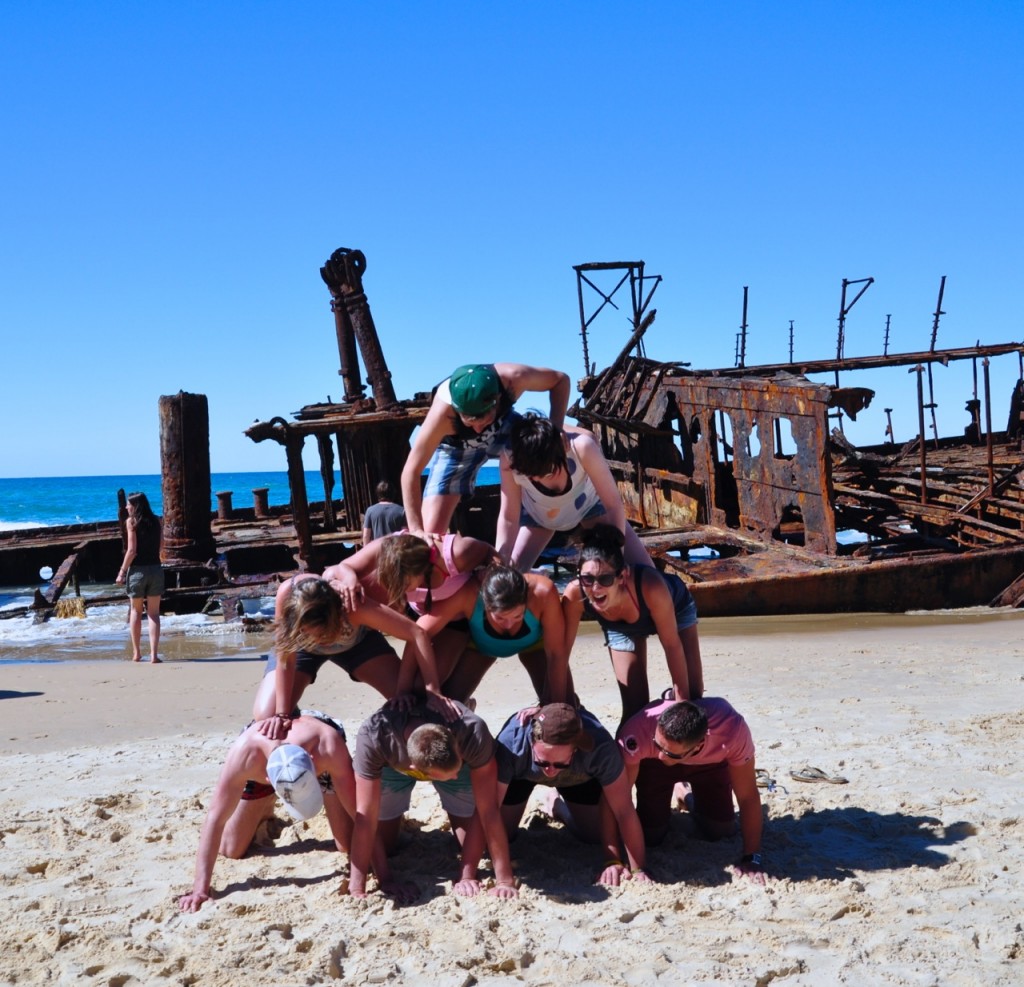 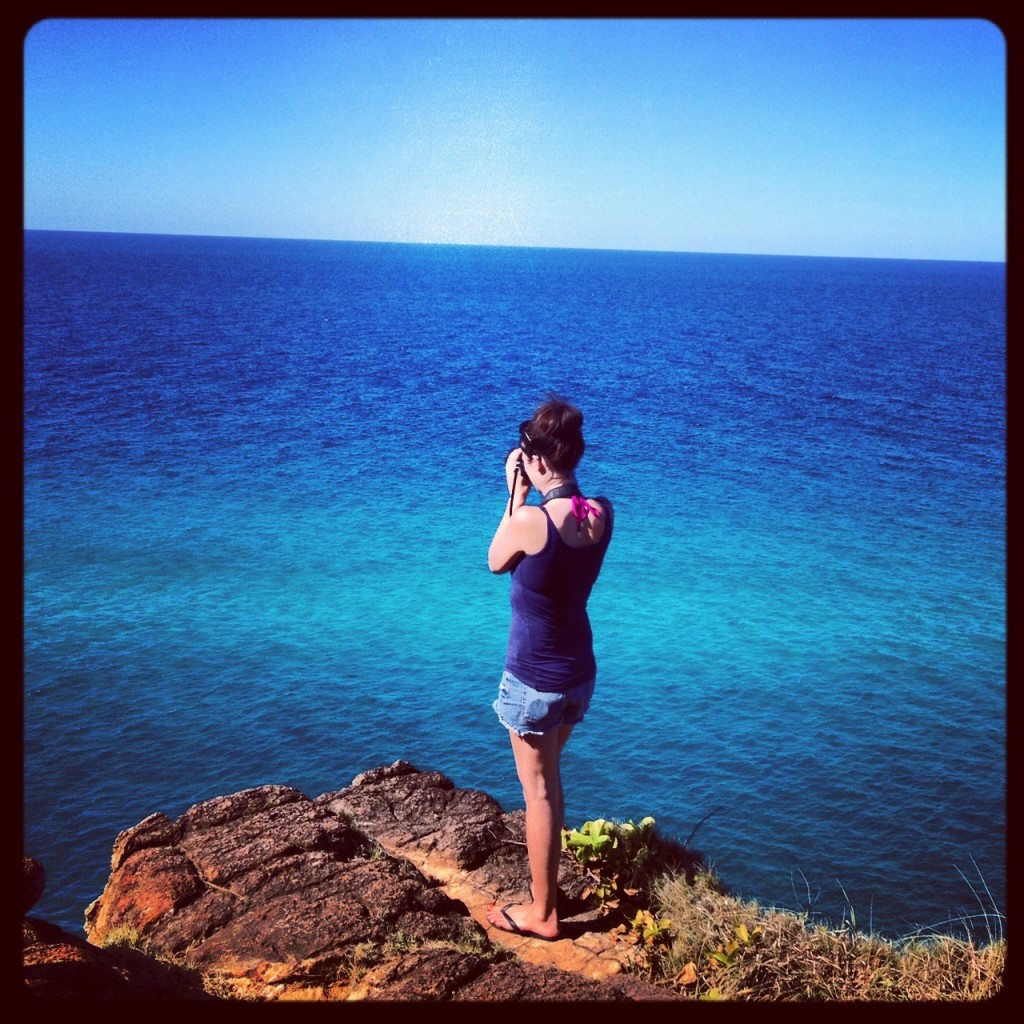 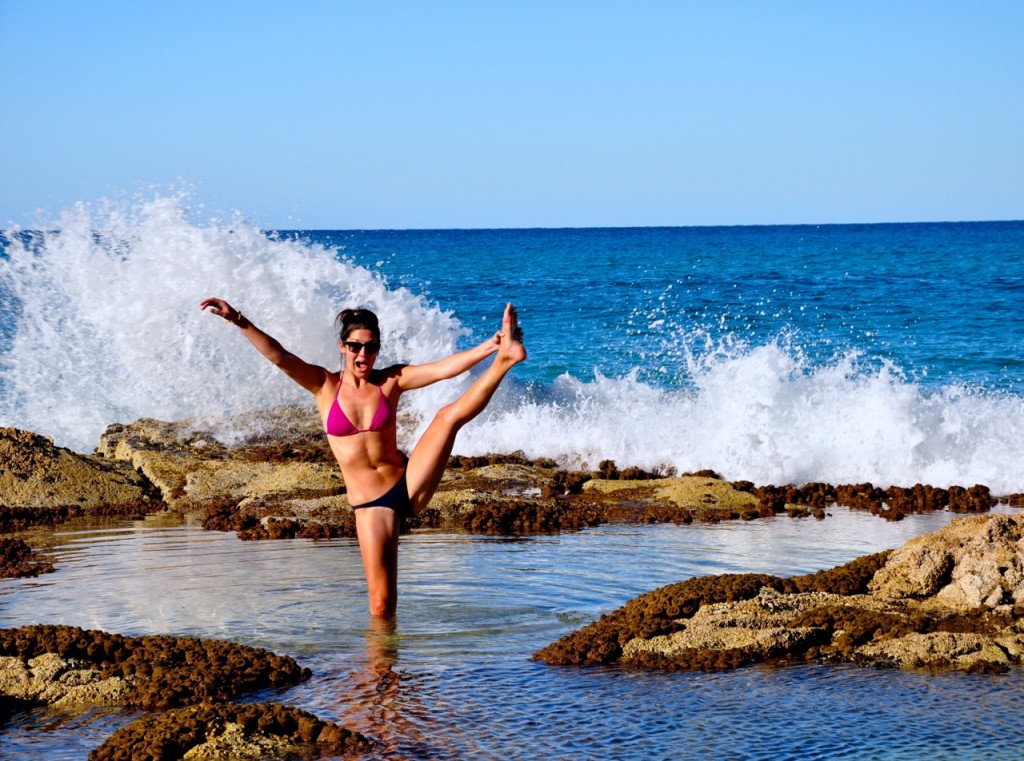 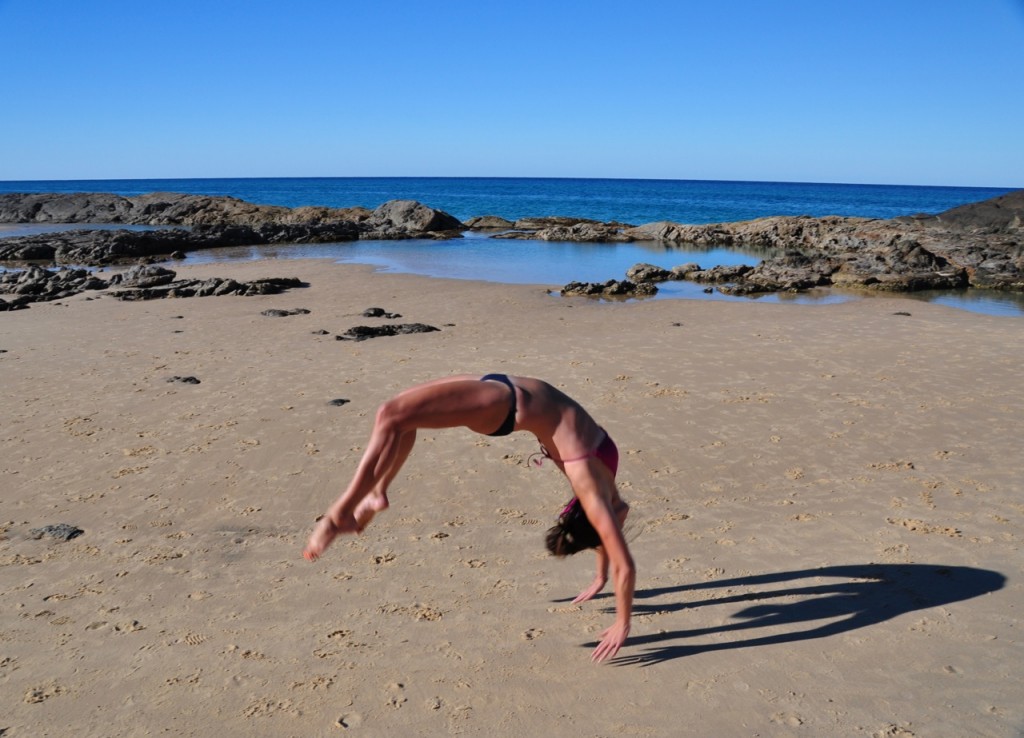 For our last day on Fraser Island, we went to Lake Wabby, which was about a 25 minute hike inland. We passed the time playing childhood game of celebrity naming from the using the first letter of the last name of the person said before you. We played with our new friends from England/Scotland, Alex & Alie. Oddly, it passed the time extremely quickly. Lake Wabby is a GIANT mound, hill of sand that you climb. Once at the top, it’s all sand. Everywhere. It was cool. I’m not sure the picture adequately paints a picture of what it’s like. 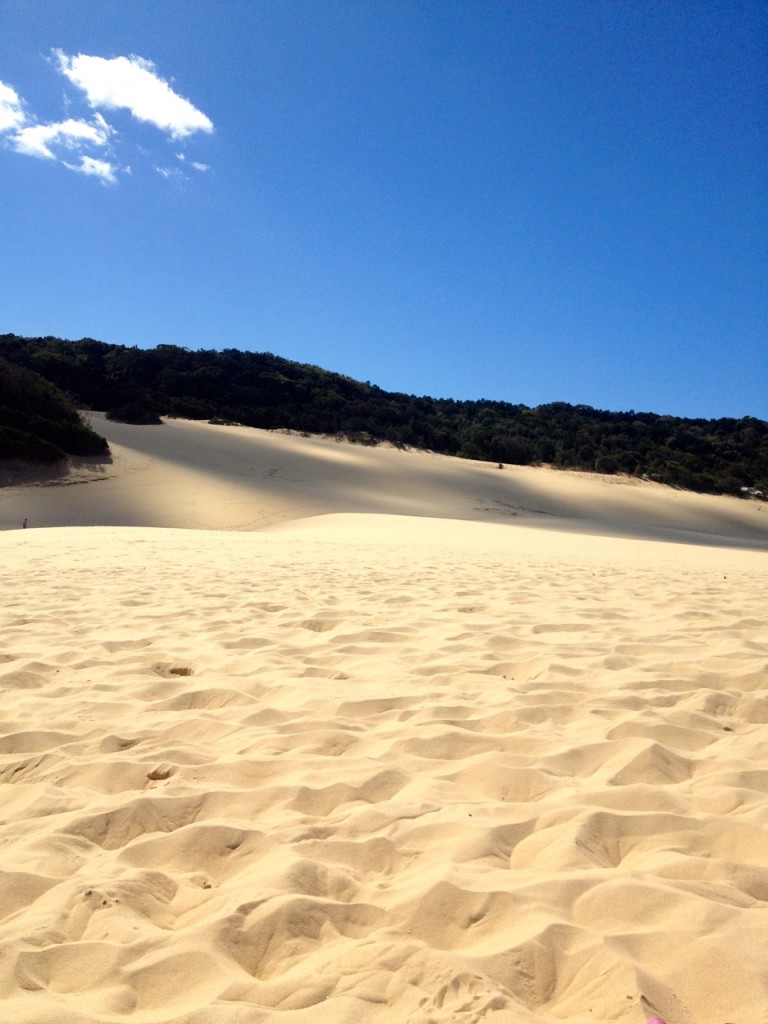 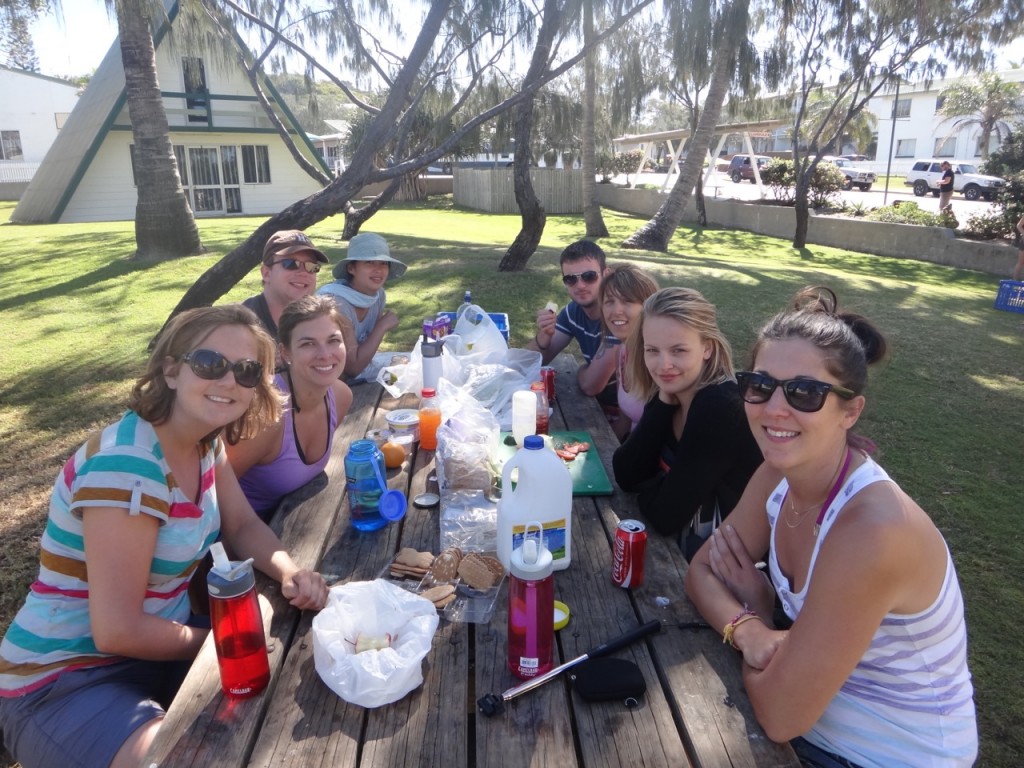 Once back at Dingo’s (our hostel), we threw everything in the wash and I took the most glorious shower of my life. I really enjoy camping but I reach my limit after three days. Our Fraser Island leader Joel gave us a little concert while we enjoyed burgers and beers and hung out with our new friends.

Some tips for Fraser Island – 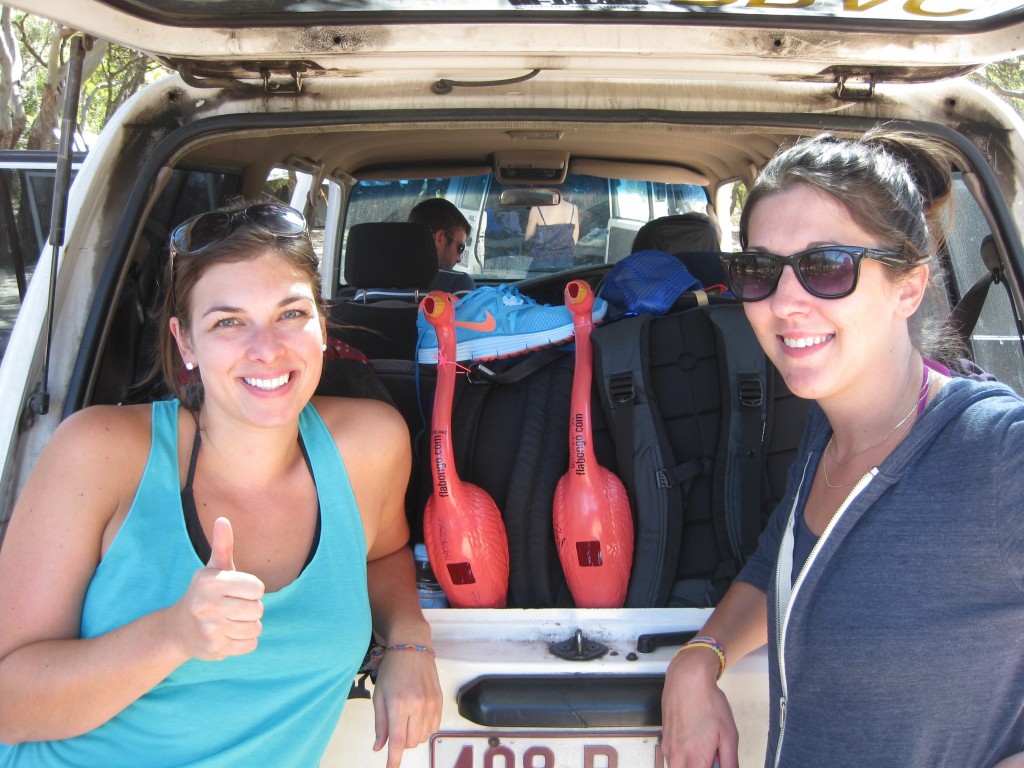