Vang Vieng is a town in Laos about half way between Vientiane and Luang Prabang. It was built up during the Vietnam War by the US Air Force when they used the area to develop a base and airstrip, known then as ‘Lima Site 6.’ In more recent years, Vang Vieng is known as a backpacker town infamous for tubing down the Nam Song river – rope swings, zip lining, slides and bar after bar serving shots and buckets of free drinks as you float down. When we were planning our trip, one of the things I was the most excited (and nervous) about was tubing in Vang Vieng. I’ve heard all the stories about how fun and crazy tubing down the river is and also how dangerous it can be if you’re not careful. When we arrived in Vietnam, we heard that most all of the bars had been shut down at the end of August by the Laos government due to the increasing number of deaths on the river.

We knew it would be a watered down version, but we still wanted to go and check it out. We arrived to Vang Vieng around dinnertime on Tuesday and it felt very much like a ghost town. On the bright side, we grabbed dinner and a big beer at one of the riverside restaurants for 20,000 kip ($2) ANDDDD watched about five Friends episodes. Friends seemed to be playing on a constant loop at every place in town, all day long, which I didn’t mind in the slightest since it’s one of the greatest tv shows. Ever.

We woke up to rain the next morning, but after grabbing breakfast (peanut butter, chocolate & banana pancakes…amazing!!!) and strolling around town a bit, the weather cleared up and we decided to get ready to go tubing. There were probably only about 50-60 folks that went out for the day, which sounds extremely tame compared to couple hundred that were typically out on the river pre-closures. First, you get your tube, get in a tuk tuk for a 2km ride to the top of the river where you grab a Beer Lao and hop in the water! It was somewhat strange at first…like tubing through a graveyard of what once was. Passing by the rickety and dangerous looking contraptions, it’s no wonder so many people got hurt. In some ways, maybe it was a good thing that the slides and zip lines weren’t open and tempting me to go down. Did they look ridiculously sketchy, of course. But also, like a lot of fun!! 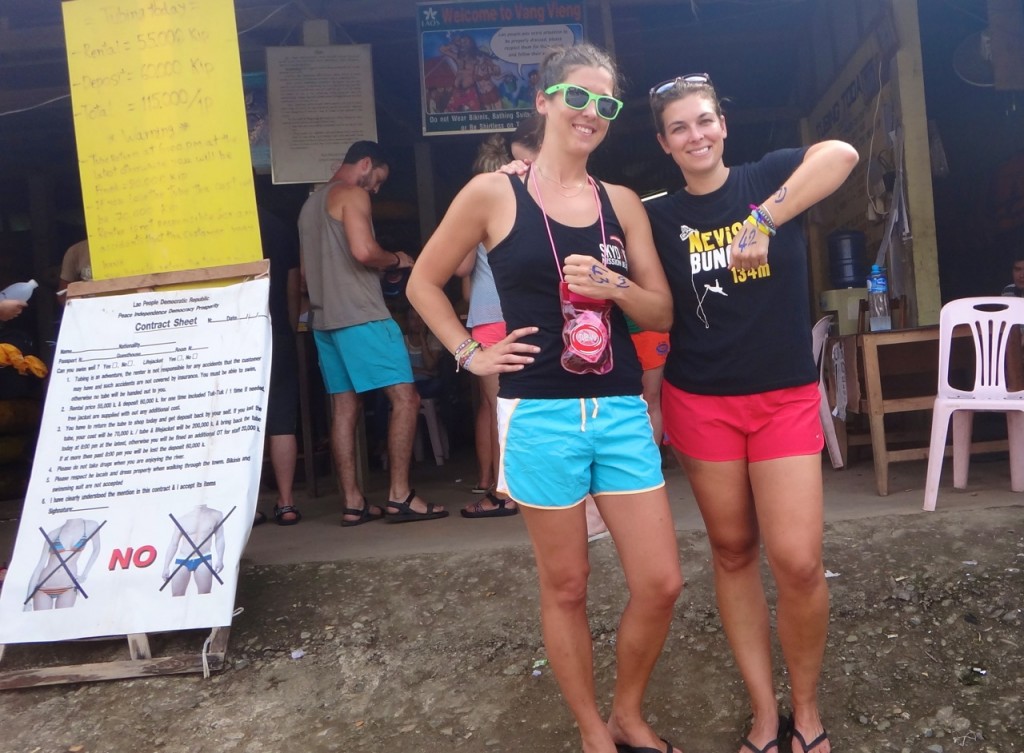 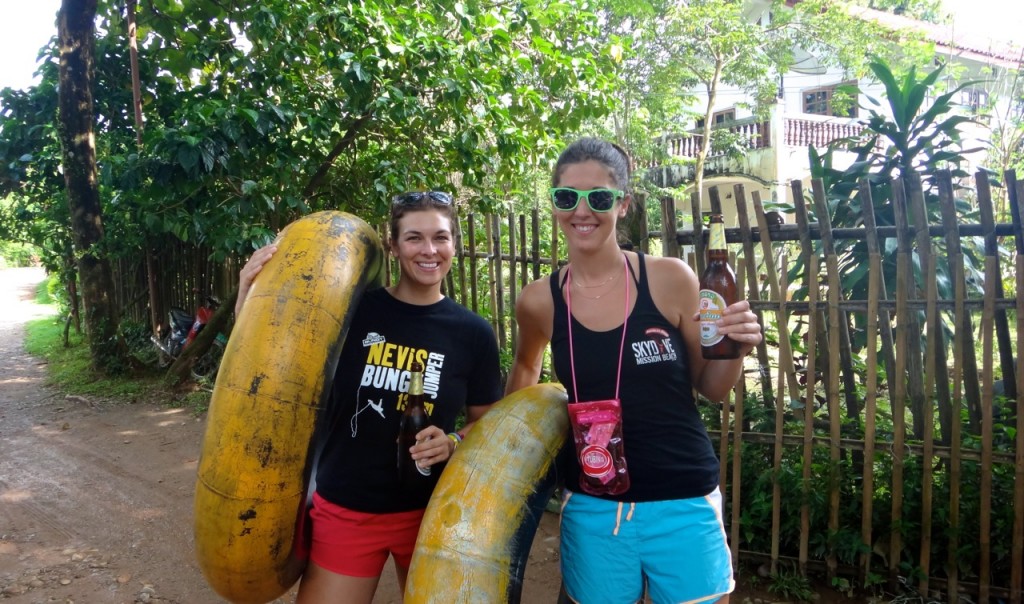 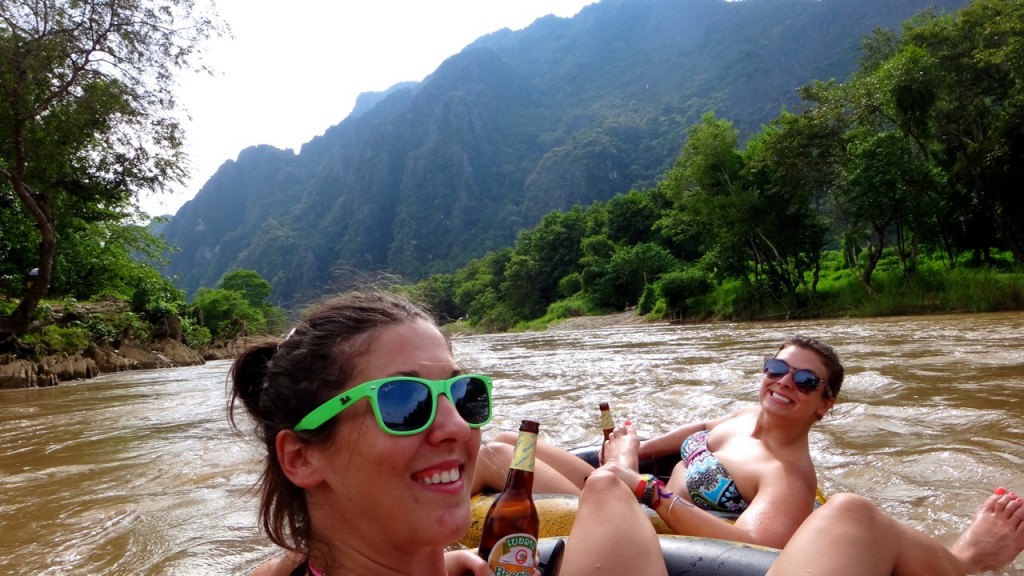 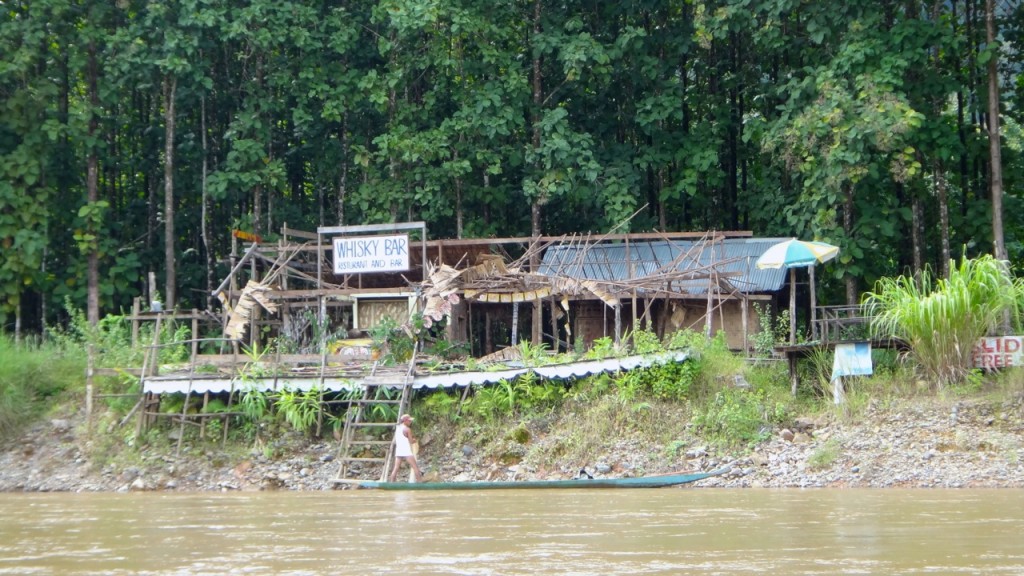 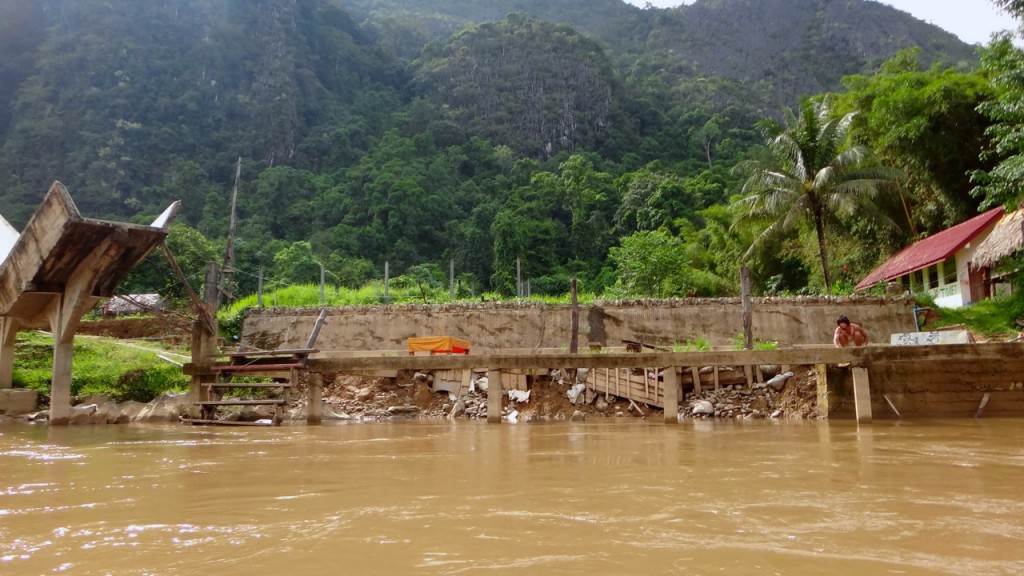 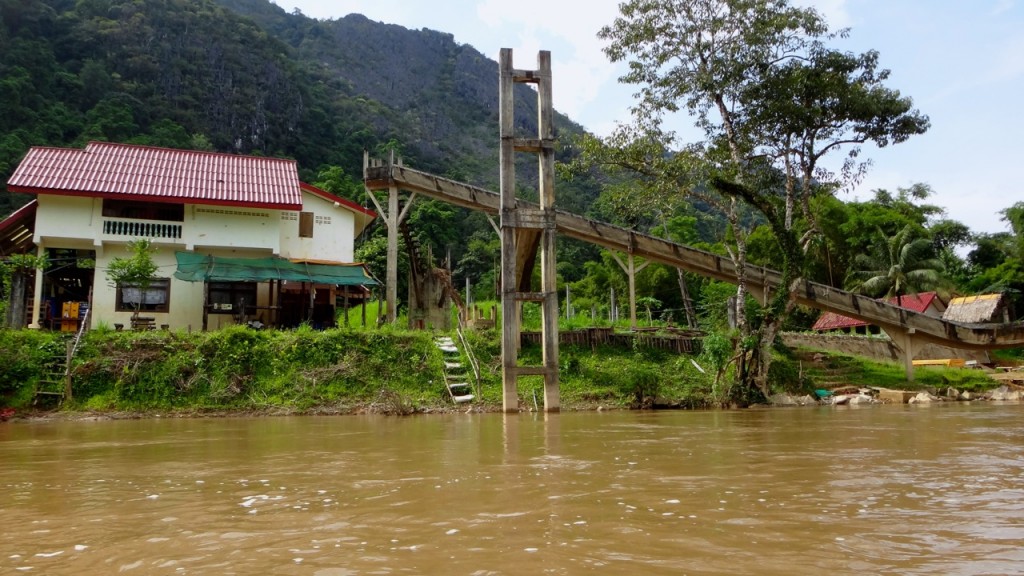 There was only one bar open (apparently two days prior there were four bars open but they were operating under the radar) towards the end of the river and we all hopped out of our tubes and enjoyed a Beer Lao. At this point, there were only 20ish of us left at the bar and half of the group decided to grab a tuk tuk and float down the river again! Since we had a larger group, the second time down the river was heaps of fun. Our entry to the bar on the second go round was not however as graceful. 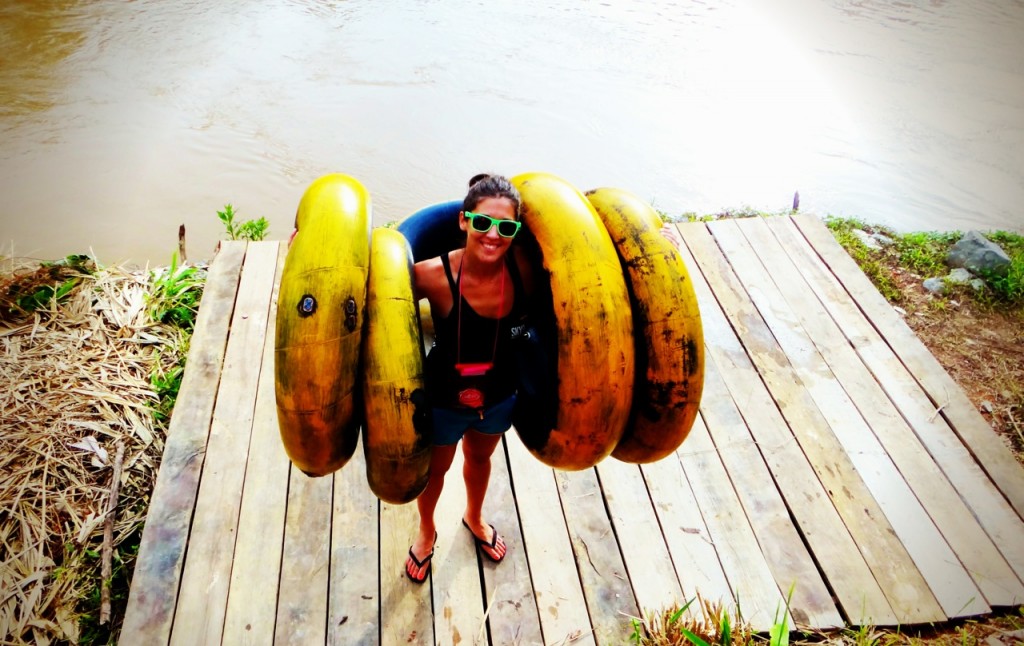 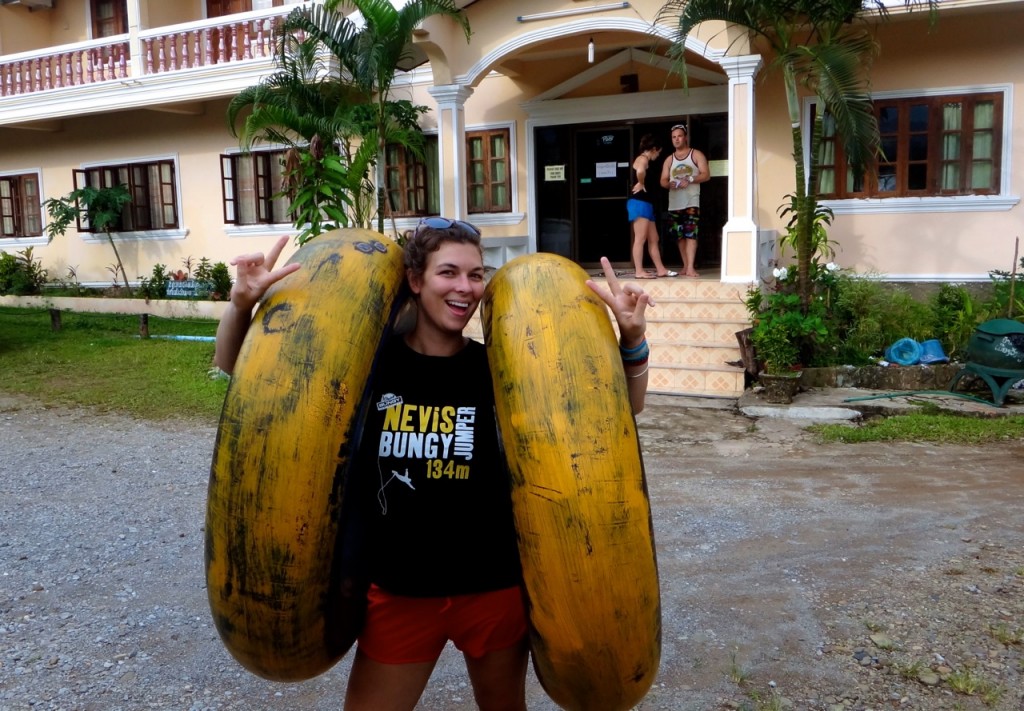 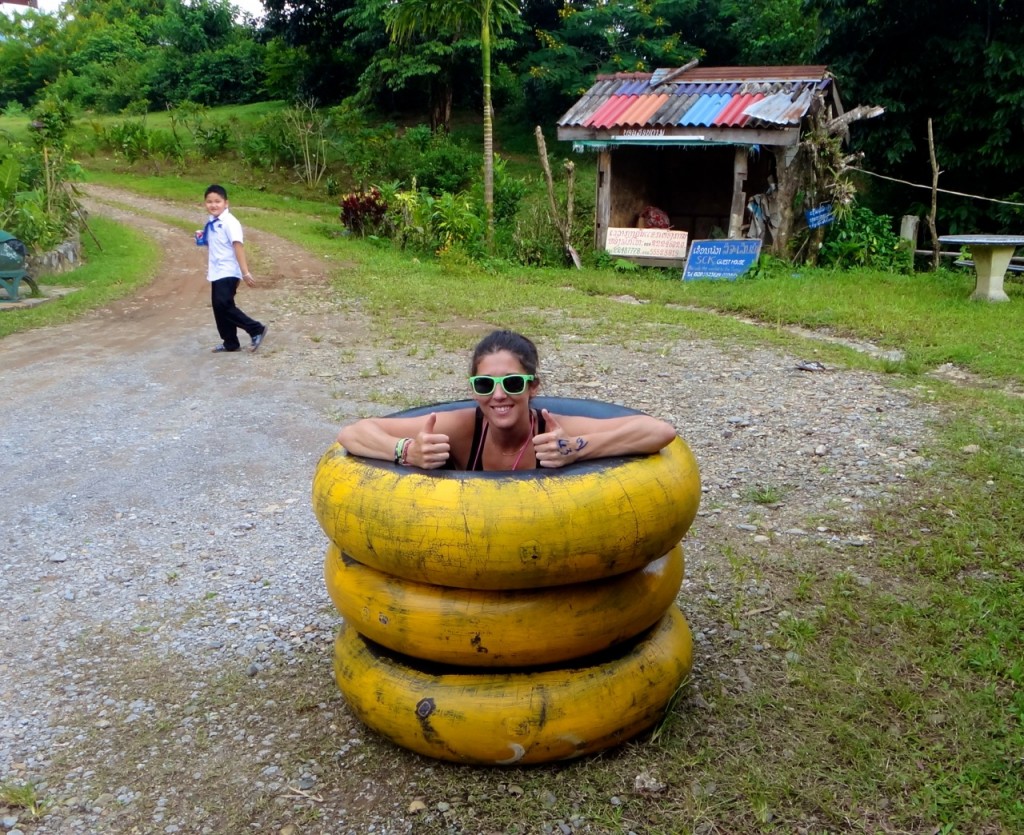 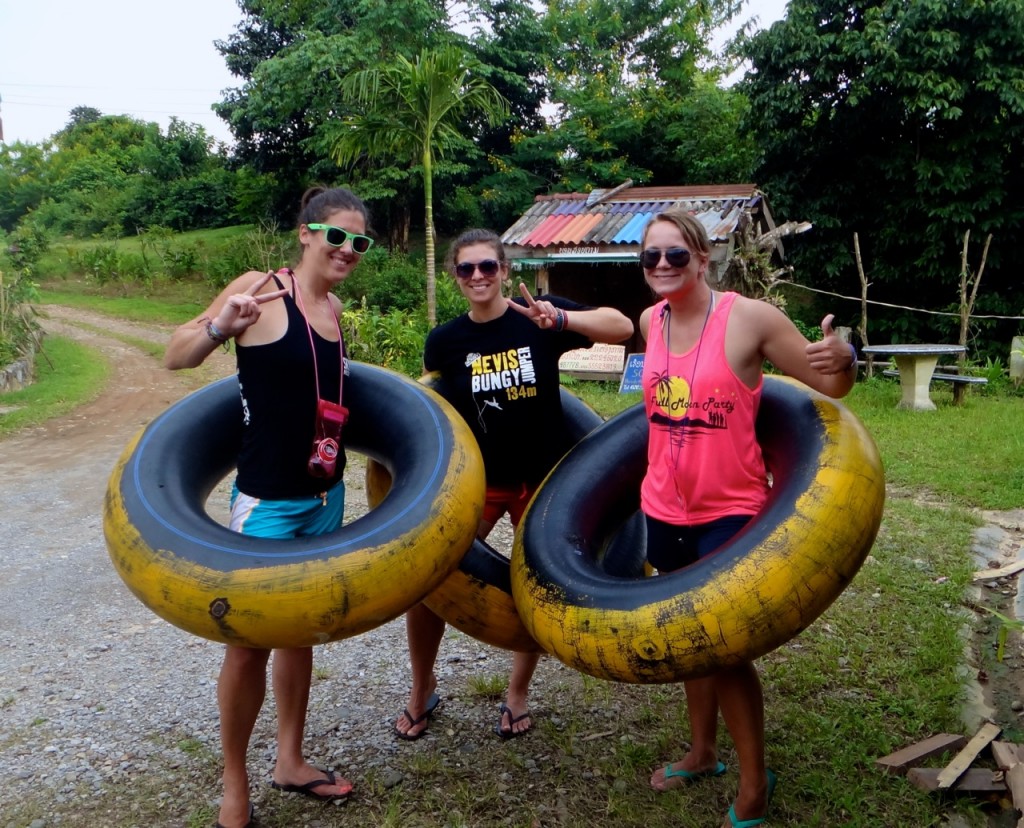 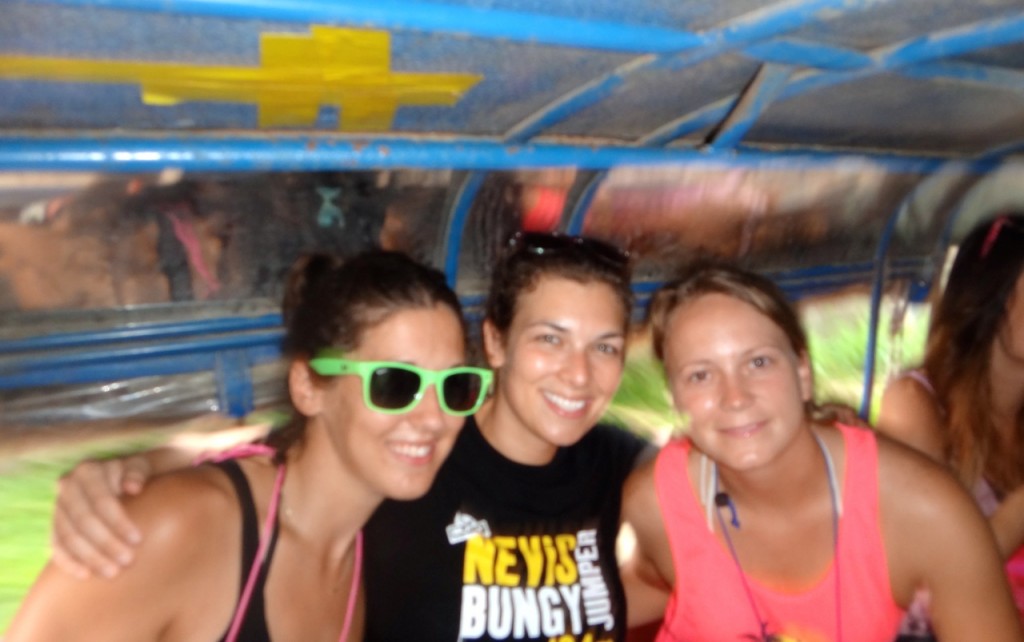 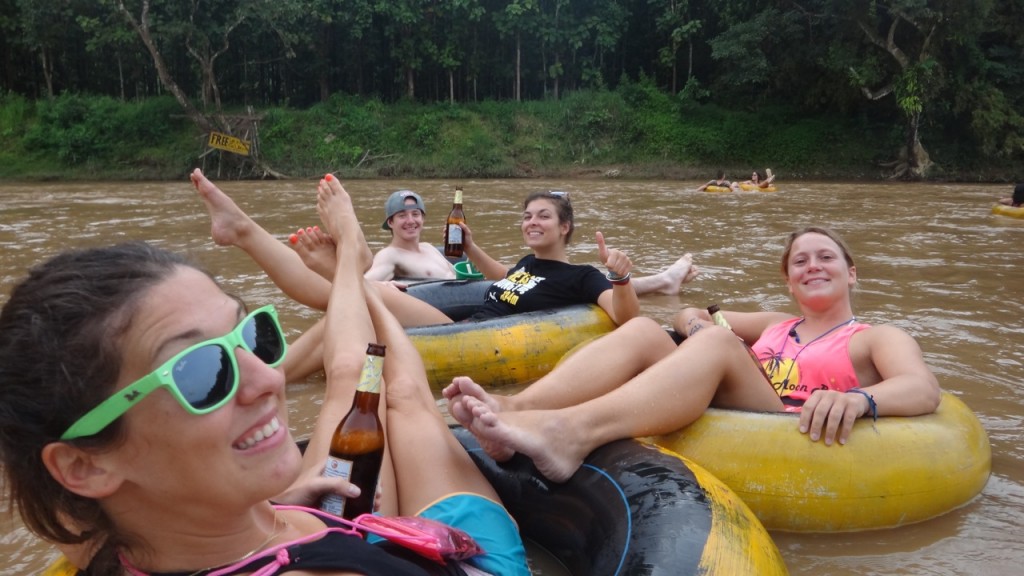 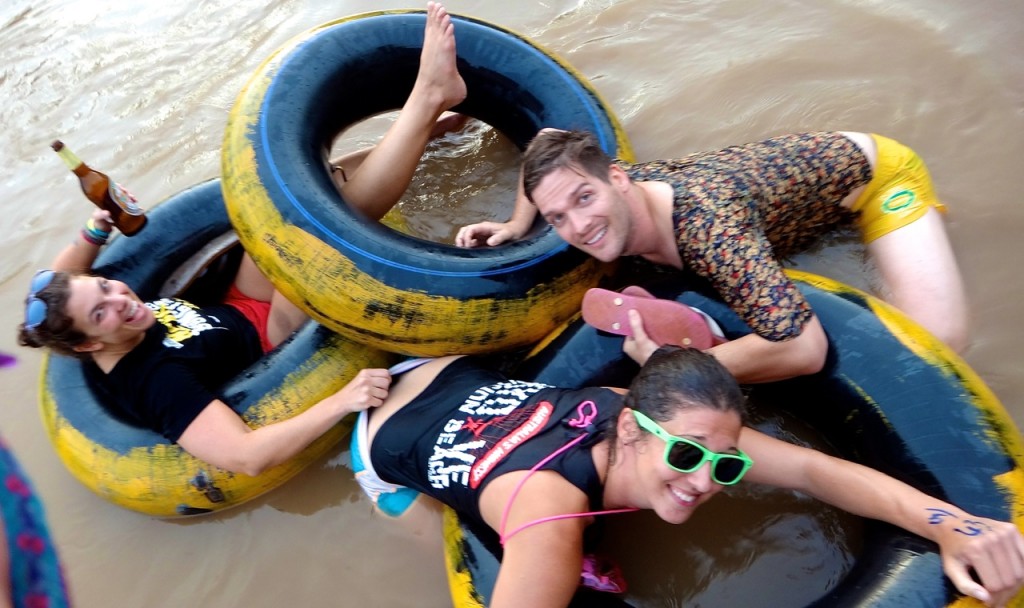 All in all, I had a ton of fun tubing in Vang Vieng. We may not have seen it in full swing (har har!), but we can say we were there during the prohibition-style underground tubing. Perhaps, if it makes a comeback and I’m near the area, I’ll give it another go. 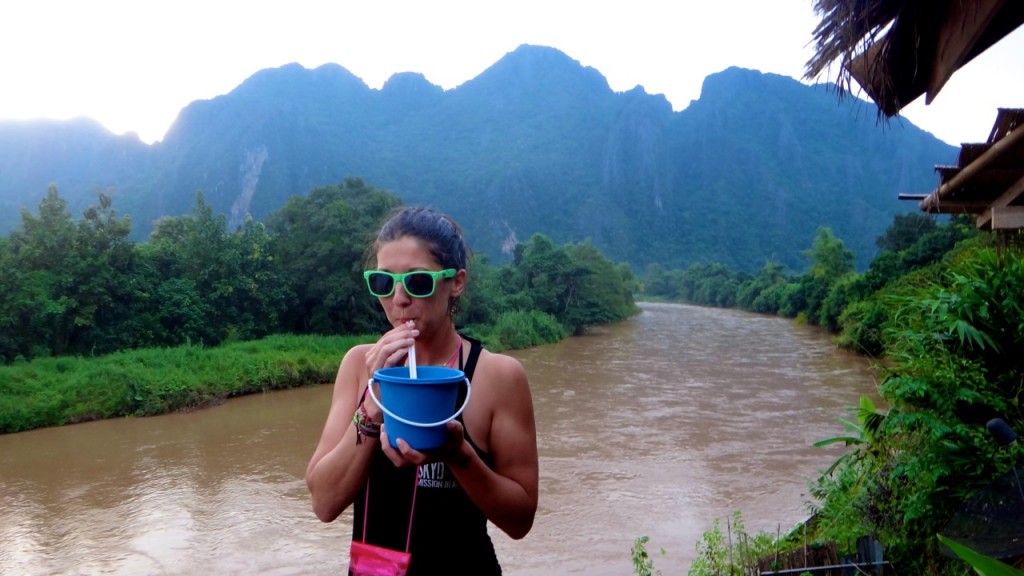 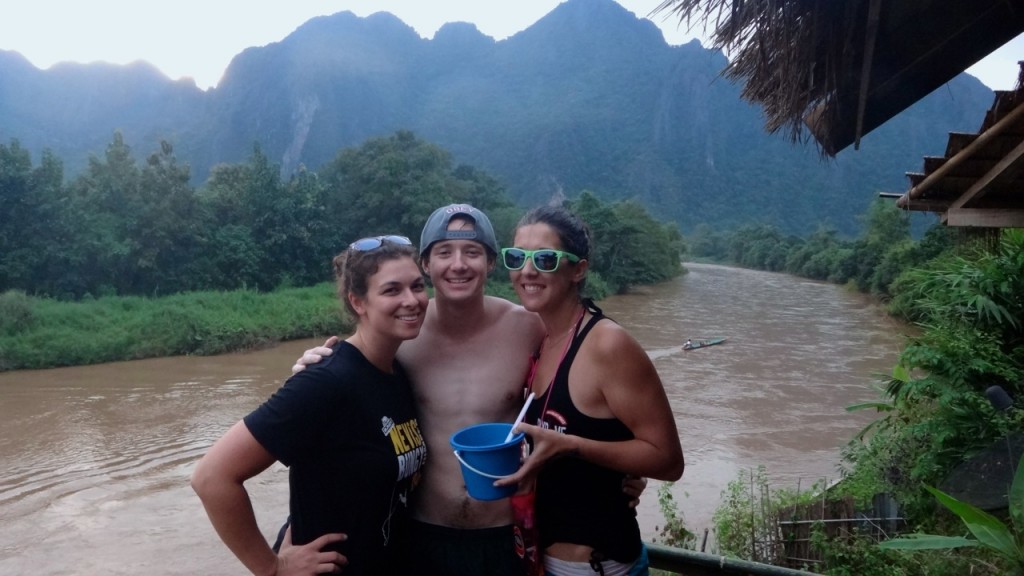 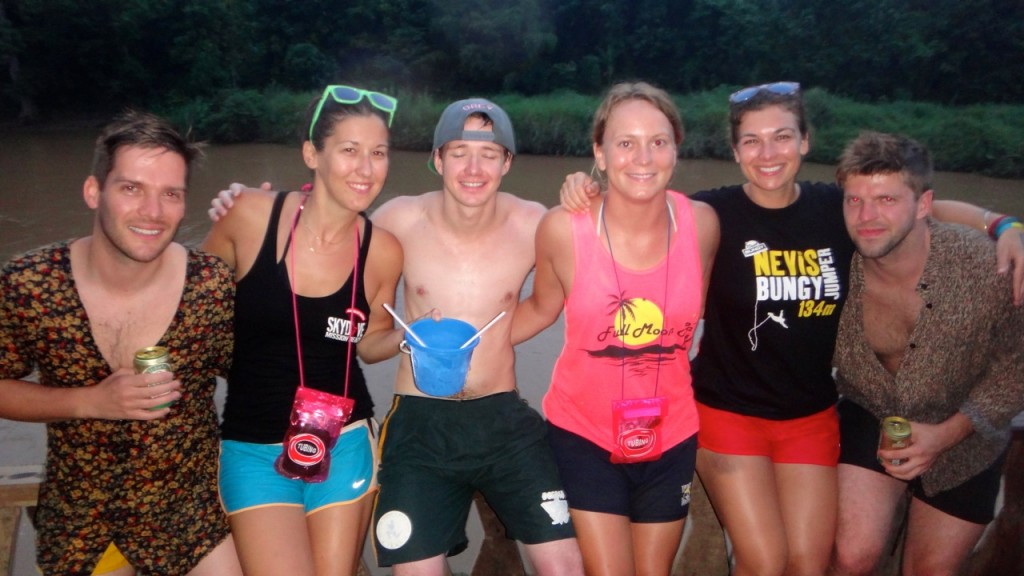 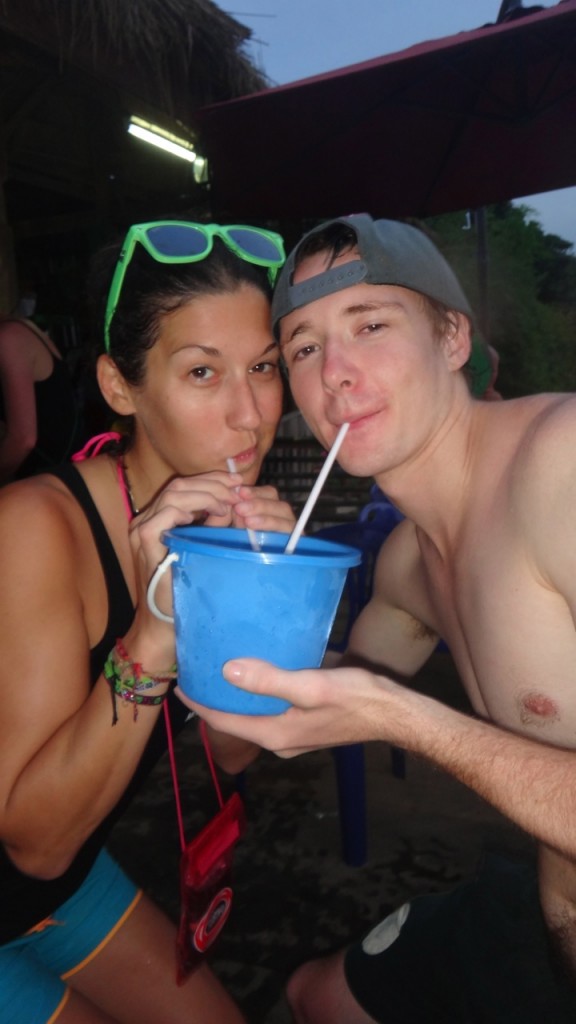 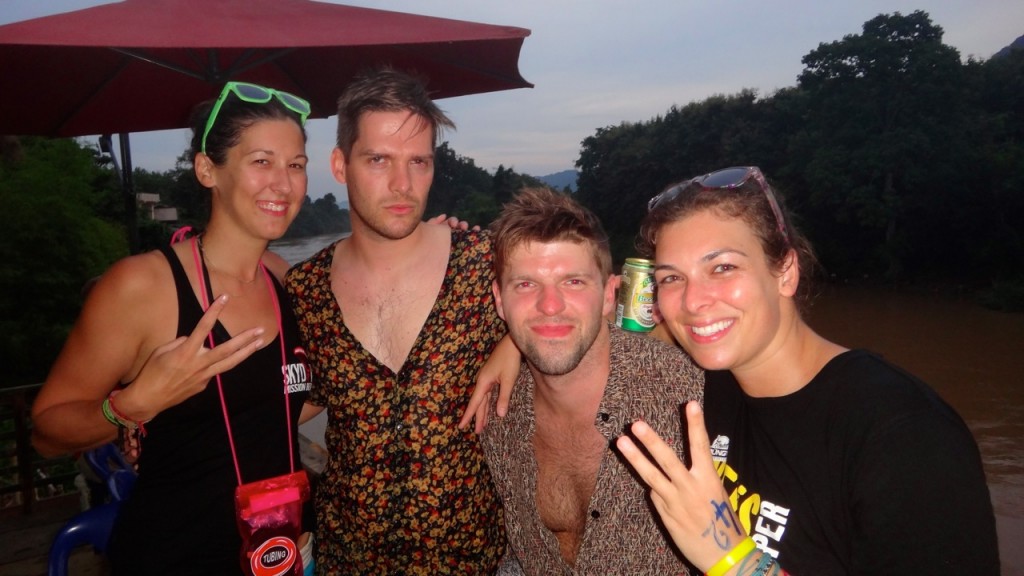 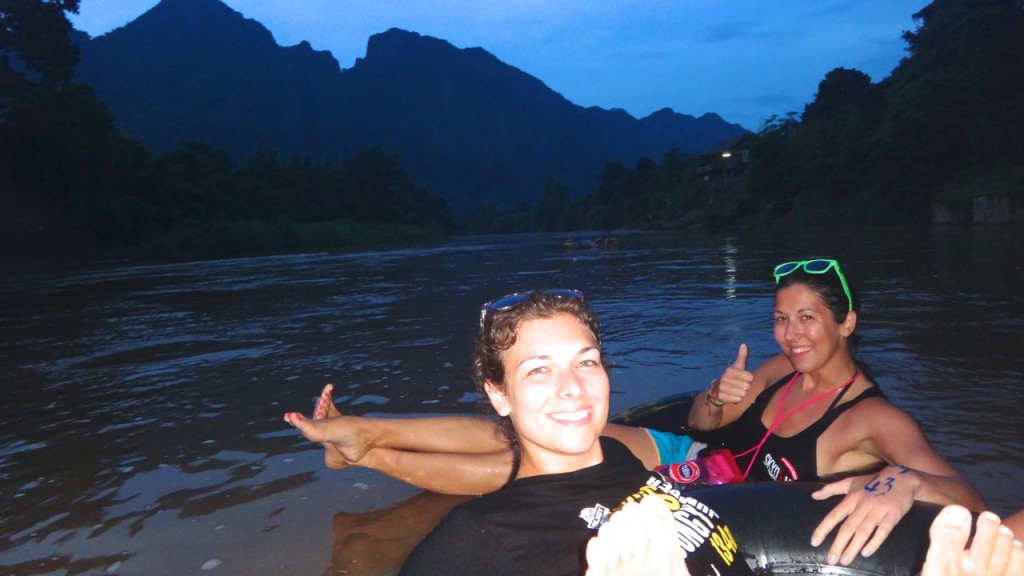 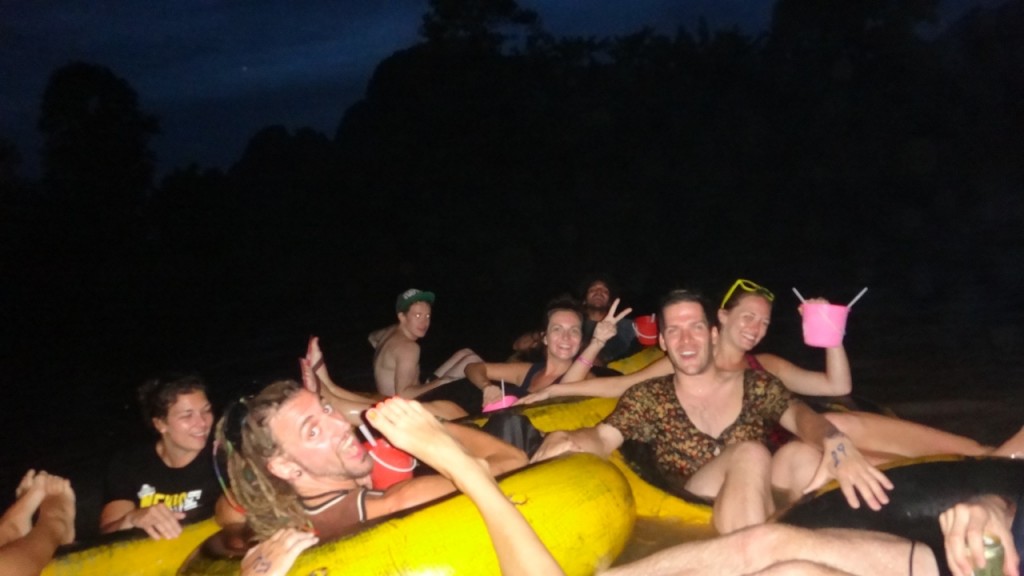