We left Mendoza and headed for Santiago, Chile by bus. A seven hour bus ride that felt like a drop in the bucket after 22, 21 and 13 hour bus rides scattered throughout the past week. Driving through the Andes Mountain range made the scenery on the ride pretty spectacular! 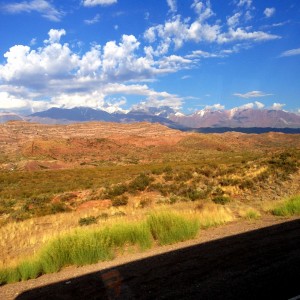 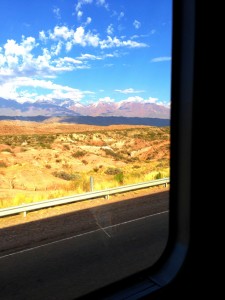 We made it to the border and country #14 on our Round the World journey! Crossing from Argentina to Chile was our first border crossing by land. We have crossed borders now by plane, boat and land. All that’s left is by foot, I suppose. The border crossing was relatively painless, but it did add a few hours onto the journey. 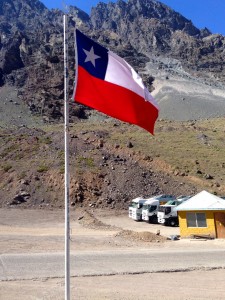 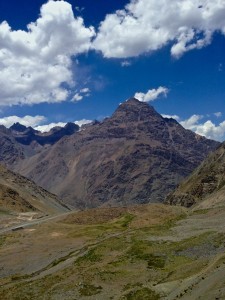 Once we made it to Santiago, we were able to meet up with a friend from California for a beer and a quick catch up before he hopped on the bus to Argentina. It’s a shame that we were just missing each other in Santiago, but it was great visiting with Boomer for a short while. Boomer is a friend I met while playing good ol’ kickball in the WAKA Dogtown division in Los Angeles. Catching up with Boomer got me reminiscing about kickball and the original 26 Tacos from our glorious first season back in 2006. And below, for those interested, is another gem of a throwback. The phenomenal recap written by Taco Dave, after the only win of that fateful inaugural season. 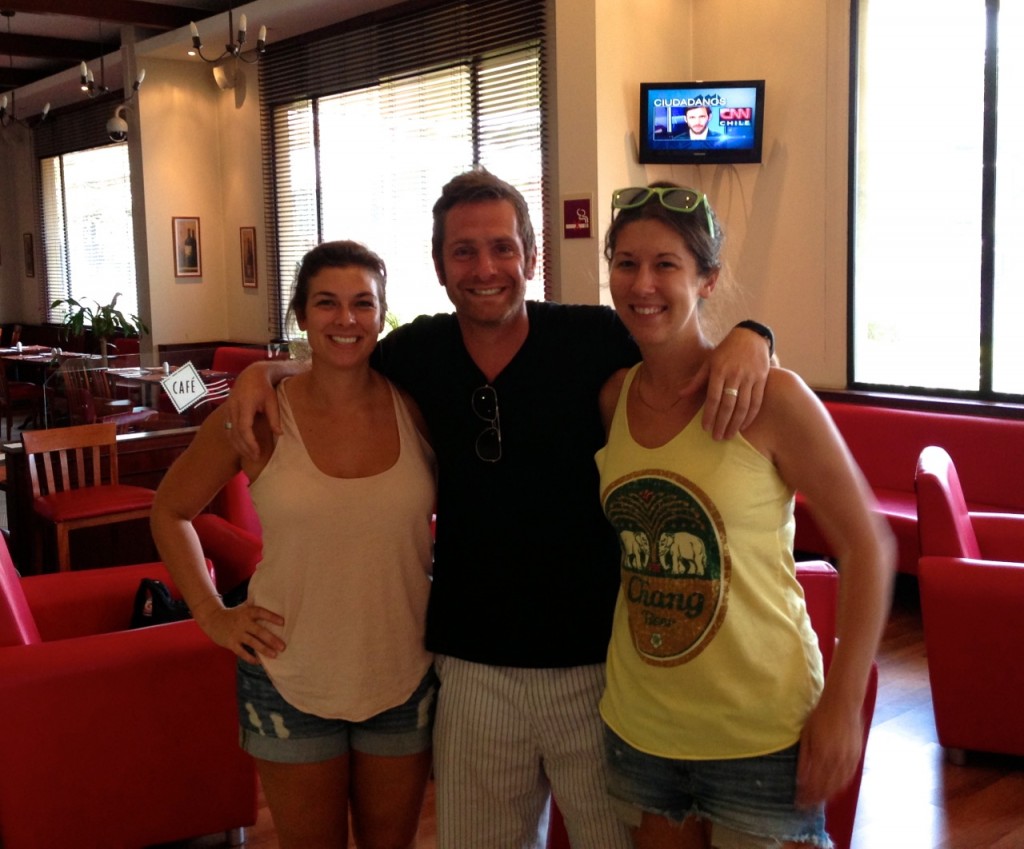 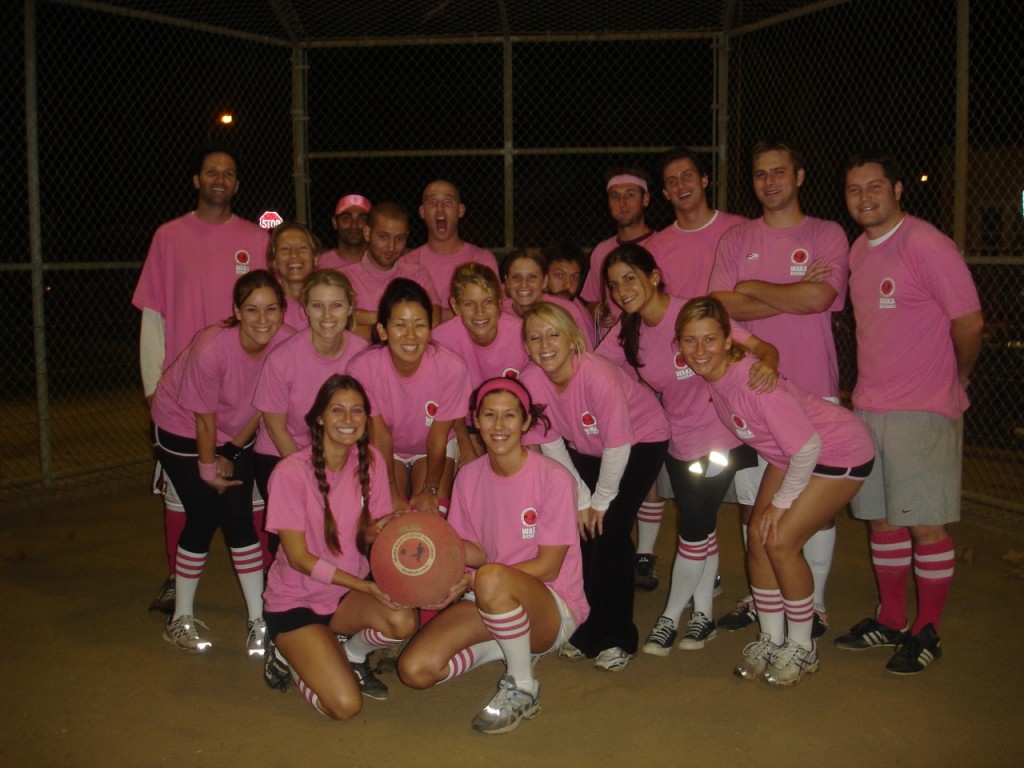 Tuesday.  Not just any Tuesday.  No freakin’ way.  This Tuesday, team Tacos has its sights on victory.  Thus far, we have only been teased with the whiff of the elusive glory, but this Tuesday, the Tacos were enflamed, ready to seize that glory.  Tonight our adversary would be the dreaded Ace of Base.

The inner taco in all of us began its rattle and hum as, one by one, we converged upon Taco Headquarters and made little pink hats out of Solo cups and kite string.  A strange ritual indeed, but also a perfect outward expression of the inner taco in all of us that knows defeat well, has been spurned by tie games, yet celebrates for the hell of it every time like clockwork.

With the juices flowing, the rally was a success, and the Tacos were moist with excitement for the potential of triumph.  On to the field.  The pink Taco team bus had recently broken down, so we were forced to ride in separate cars; one of them even rode his bike, but the group energy did not dissolve; it only intensified once we arrived and saw the field, crackling with possibility, that beheld Taco destiny.

Led by Rochelle, a brief warm-up of group calisthenics limbered our loins and prepped the Tacos for the volley of ball handling that followed.  Having satiated the Tacos desire to handle some balls, the team took their place in the dugout, now dripping with anticipation.

Allison, co-captain and team Tacos’ most avid rockscissorspaperer, stepped up to home plate for the fateful showdown that set the stage for the game of our lives.  With expert reflex and intuition, she buried the competition, crushing their flimsy scissors with the mighty rock that was her fist. The Ace of Base representative didn’t know what hit her. Dazed, she needed an escort back to her dugout.  We took the field.

Umping the game were two fair-minded Tangers with the highest moral character.  It would be their wisdom and lightning decision-making that would support the Tacos on their march to glory.  Other Tang members stayed in the grandstands to cheer the Tacos on. Sister-teams, the Tacos and Tang, aside from being divided by their contrasting colors, share in a unity of spirit and hearty use of synonyms.

Stepping up to the plate, kicking dust behind like an angry bull, the first Ace of Baser faced off against our fearless pitcher Kyle, the best ball handler among us.  To watch Kyle pitch is like watching Picasso paint; the ferocious spin mixed with a rollicking bounce highlighted by the subtle caress of a true master makes Kyle’s pitching a fantastic spectacle and a formidable challenge for any kicker of any WAKA color, for the kicker is lured by the seeming stability of the ball’s movement then deceived by the forces within that Kyle had employed.  To no one’s surprise, the Ace of Baser got out.  Then another, then another, and the top of the first came to a close as fast as it started.  Dumfounded by the tenacity of our defense, Ace of Base took the field.

Now it was team Tacos turn to bring the heat.  To make an uneventful and potentially long-winded story short as can be, we didn’t score.

Up until the final moments of the game, it was the Taco defense that deserves the most admiration.  The field was as impenetrable as a tasteless taco.  Play after play, the Tacos kept them wanting, shutting them down.  The pink was on.  In one particularly agile play, an outfielder scooped the ball and chased down the Ace of Baser heading homeward.  Pink Solo cup hat a-bouncing, the Taco hurled the ball at the wily runner just as he was ready to score.  And bam, tagged his ass; third out.  This courageous and brave Taco’s name was Dave.

But it wasn’t all spices and zest, because Ace of Base scored a run in the third inning.  Now the Tacos were trailing and as great as the defense was this night, one slipped through the cracks.  The pressure was on for the Tacos offense to deliver.

In the fifth and final inning, the defense held strong.  Kyle caught a low line drive on the fly and some spectacular plays secured the score at 0-1.  But now it was the Taco’s turn to kick.  Having meticulously devised our lineup, Beth called out the order.

No one evidenced the need for offensive progress more than our team captain, one Beth Meyer.  Having gotten to first with a tactful kick, she was hungry for second base, all the while, dreaming of rounding those bases and granting her beloved Tacos a run to tie up what had become a grudge match.  Once Rochelle put the ball into play, Beth bounded from first, sprinting like Jesse Owens to second.  Ace of Base was determined to prevent her progress, but nothing could stop the freight train fury that steamed uncompromisingly toward second base.  One person tried.  An unsuspecting second basemen, who was actually a second basewoman guarded the plate.  She caught the ball and Beth was forced out.  But like I said, nothing could stop the head Taco.  The collision happened swiftly as the poor little lass at second base absorbed all of Beth’s momentum and was sent flying.  Beth tumbled on top of her nearly conscious body, and Ace of Base circled the event with frenzy.  It nearly cleared the benches and descended into an all out brawl but fortunately and miraculously the victim was not physically injured, although, psychologically, I venture to say she was destroyed.  Even some local policemen who had saddled up next to the field felt compelled to comment on the spectacle over their loudspeaker.  Beth was called out, continuing the Tacos’ stifled tread toward the last inning, but I believe a tide turned the moment Beth took out the Baser.

Rochelle is holding strong on first base as David approaches the plate. David kicked the ball for a single, however Rochelle was tagged out in the process. Kona approaches the plate and she performed in true Taco fashion and got on base despite the daunting hopelessness of only one out separating the game in play from another crushing loss. David stood safely on second. These Tacos of mine showed the pink, and tears flood the keyboard now as I think back to the heart and rigor they displayed in the bottom of the fifth with two outs, and an unimpressive track record.

Top of the order; Adam steps up.  Deceptively, he kicks a grounder to the left infield.  David must move like the wind to get to third and avoid being tagged.  With two outs against us and nothing to lose, David takes his first strides as soon as Adam makes contact.  The Ace of Base is startled and confused.  Having backed up, ready for a slam of a kick, they now must rush in to make a play.  Racing to third, David hurtles the kickball spinning in his path, right in enemy territory with a gaggle of Basers closing in on that red rubber ball and any Taco near.  He’s too quick for them and dives to third base.  The Basers are too late; they try to tag him, but he’s safe.  Meanwhile Kona has made her way to second, and Adam safe at first.  Bases loaded.

And then Alistair is up.  Only once or twice in the history of the Tacos has possible victory been within reach.  Now all the pressure fell upon Alistair’s shoulders.  Keeping his composure, hardly a tremble, he steps up to the plate.  The other Tacos and the Tangers are roused by the momentous moment.  Yeah, that’s right, because it truly was a momentous moment.  Undaunted by the pressure, pink visor gleaming in the Tuesday night lights, Alistair patiently awaited a suitable pitch.  Upon the fourth one, he seized history by the balls and displaced all of his ‘tacocity’ into the red rubber orb.   It sailed through the air as if catapulted by Vikings.  The risk of a caught ball was pending.  The Tacos on base had already embarked on their path to glory.  The thud of the ball hitting the ground resounded like an angel fart and was placed deep enough to allow not only David to score, but Kona as well, instantly transforming a losing game into a victory.

It was a walk-off kick, the game was over, and the Tacos burst from their seams with seven game’s worth of pent up energy.  Hoisting our hero high above the crowd, the Tacos carried Alistair through the mire as we traded high fives with the Ace of Base, a worthy adversary.

Tacos topped with jubilation, Joel Simon drenched in tears of joy; a remarkable sight, and one that will live long in the memories of all that were there. They played like warrior-poets, they played like Tacos, Tacos to the bone.  And this euphoria experienced on the field will in turn foster an addiction to victory, where the Tacos will reign supreme.  The future looks bright for our Tacos.  It may not be the season for domination, but it will come.  It will rain down like salsa from the heavens.  Tacos till I die!!! 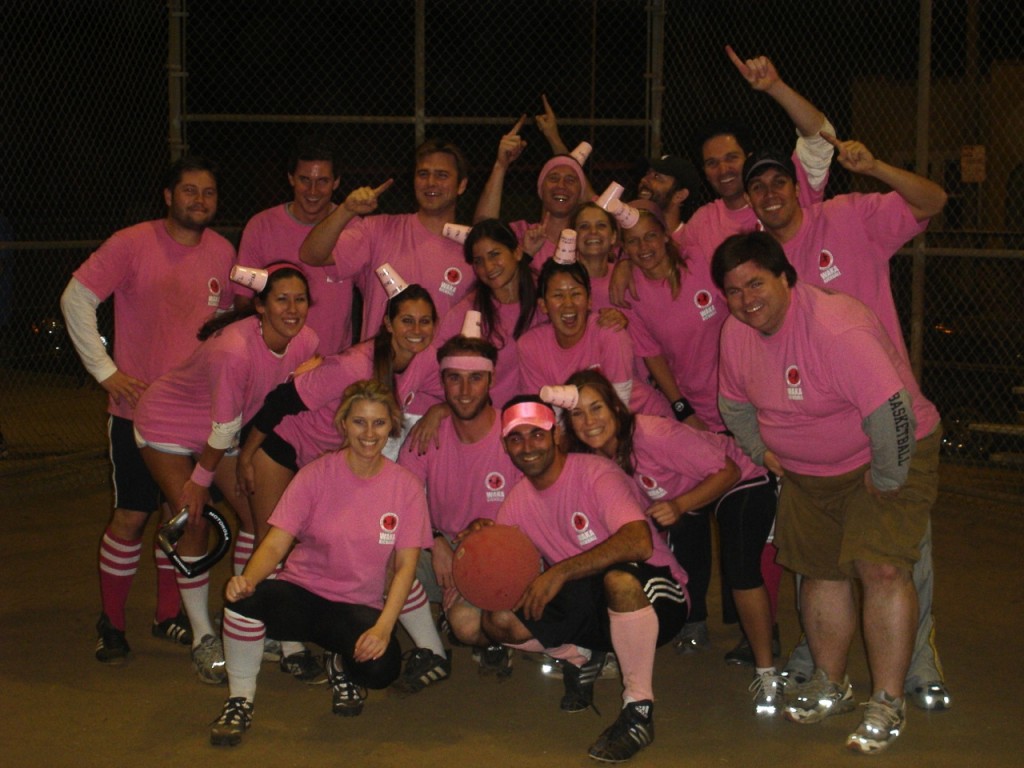 (photo from the winning night!)