San Pedro de Atacama is a town in northern Chile in the Antofagasta Region and is located close to the borders of Bolivia and Argentina. The town sits at just over 2,400 meters above sealevel, so it’s no wonder Danielle & I had our first run-in with some mild altitude sickness.

One of the main reasons we came to San Pedro de Atacama (aside from the glorious bus trip layover through Calama…it was NOT) was to visit the Valle de La Luna or Moon Valley. The brochure we received at the entrance gates said that it’s “An experience outside of this world” and it really was.

We were trying to figure out which tour group to go with (I think tour companies outnumber mini-grocery markets 10-1 in San Pedro) for our visit to Moon Valley when we walked by Atacama Inca Tour and saw that they offered sandboarding. We’d both wanted to try sandboarding at some point, so we figured this was the best tour for us! Plus, doing the sandboarding got us out of just hiking around Valle de La Muerta. Not that we don’t enjoy hiking, but we’re not the most keen on long treks. This way, after the hiking, the way down was on a sandboard. As a skier, I was concerned how I would fare as a sandboarder and after my first run, I was almost ready to throw in the towel. Butttt, after run number two, I got the hang of maneuvering, found my groove and really quite enjoyed it! I only went down three times and would’ve gone down more but the hill was a real son of a b*tch to hike up (especially with the altitude and lingering side effects I was feeling). Sandboarding made me think I might enjoy snowboarding, though I´m not sure I´m ready to toss aside my ski´s, or my RAD 80’s hand-me-down ski suit, just yet… 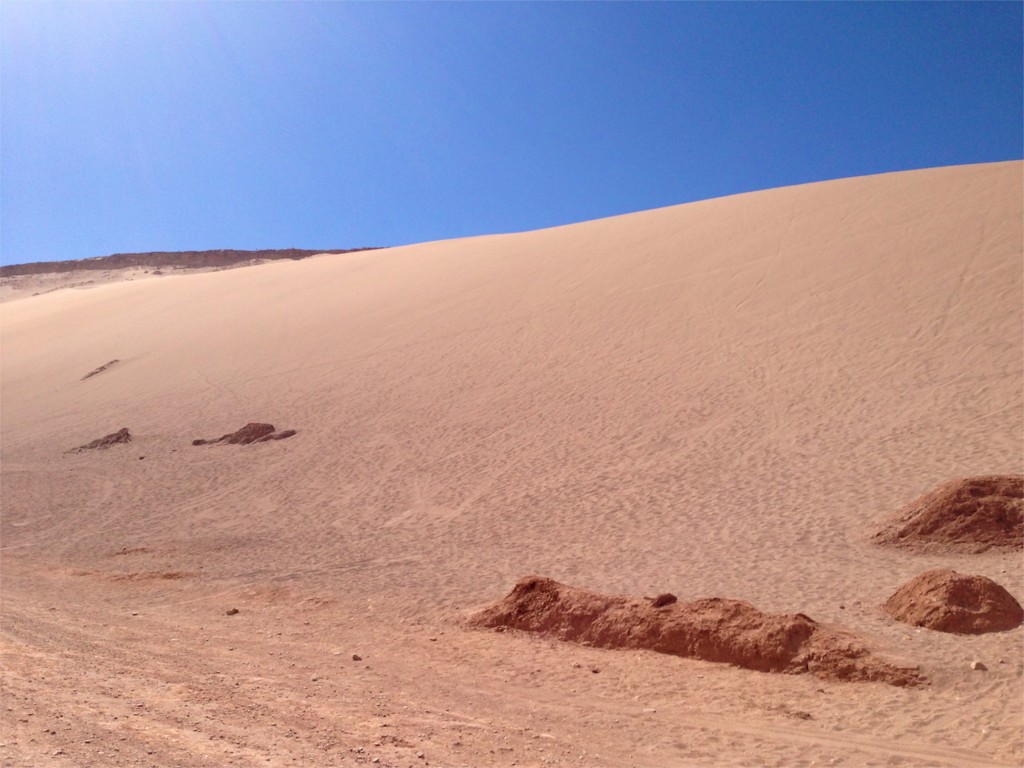 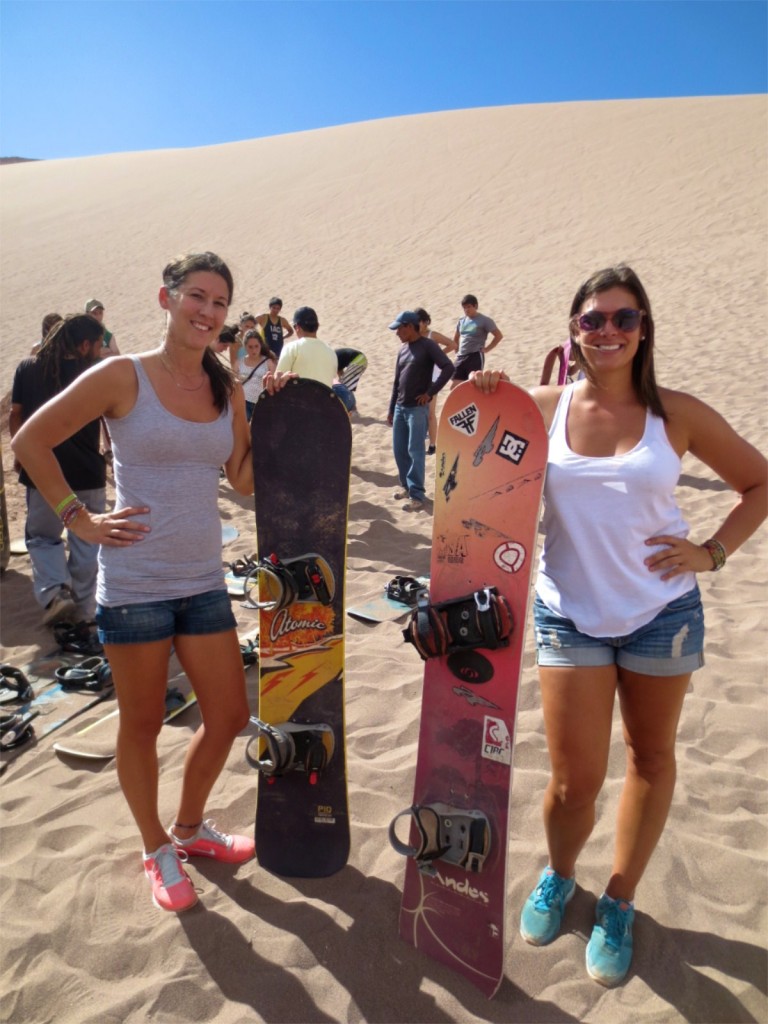 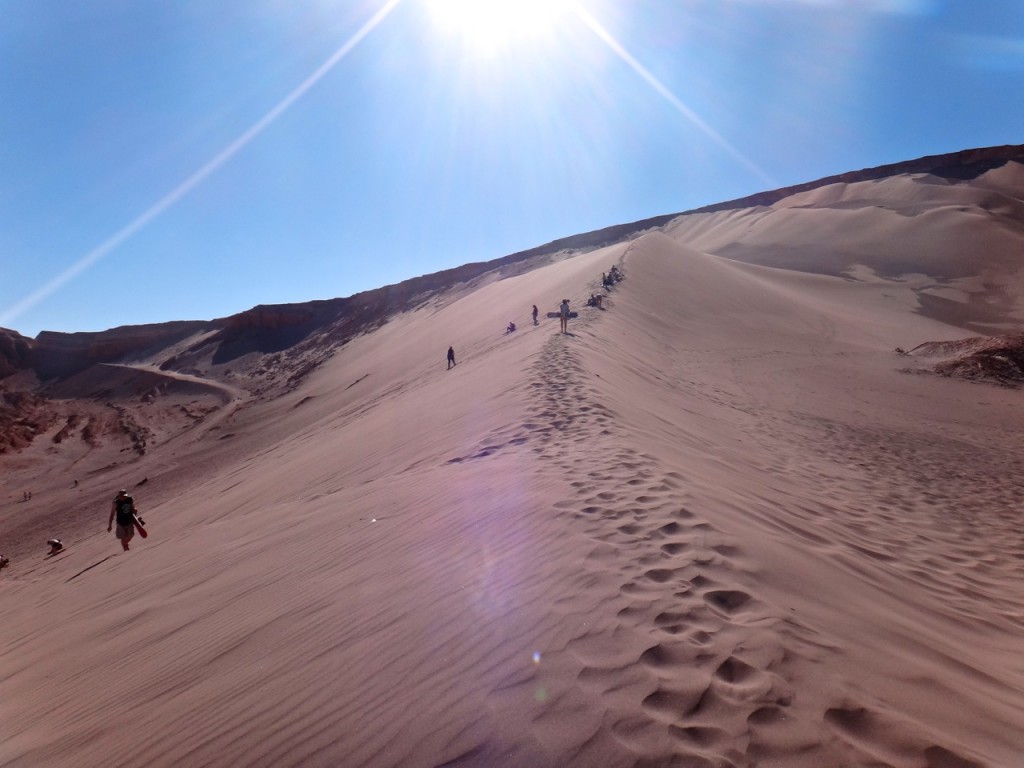 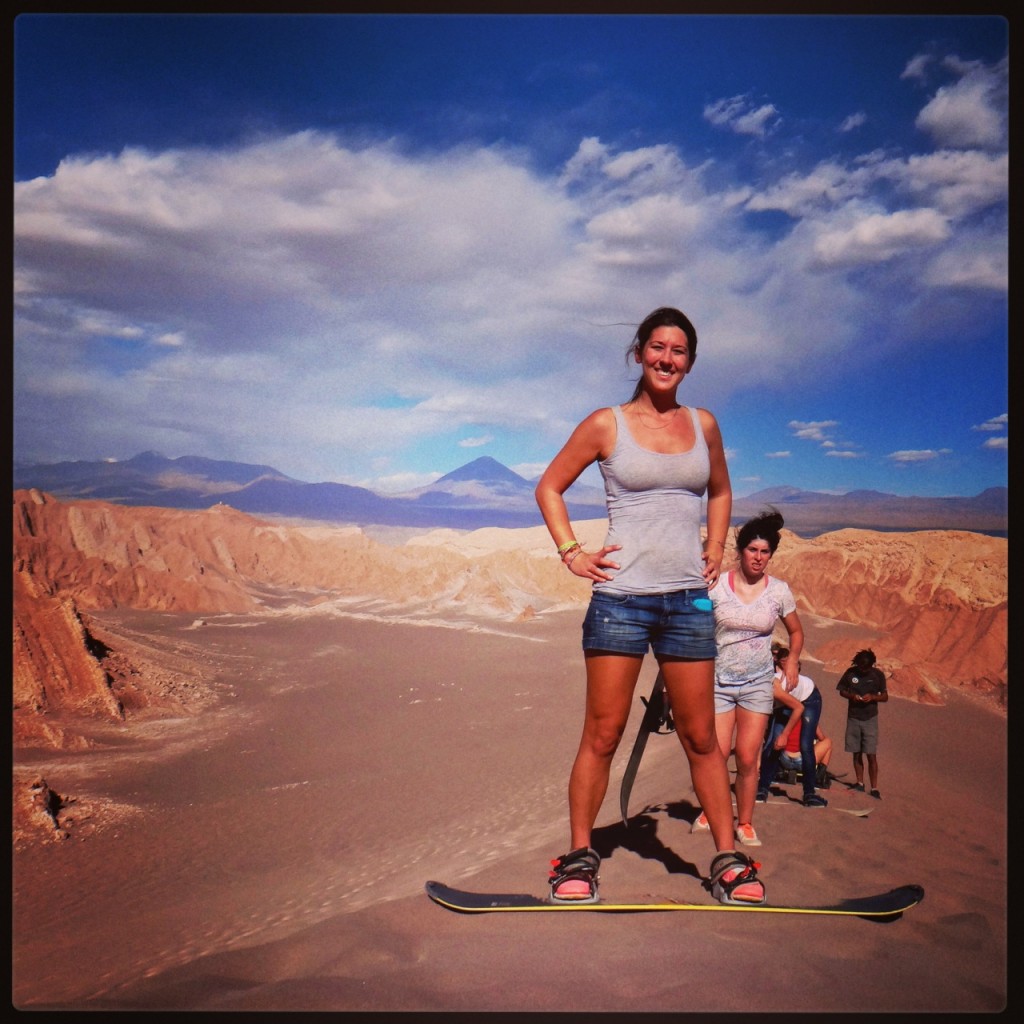 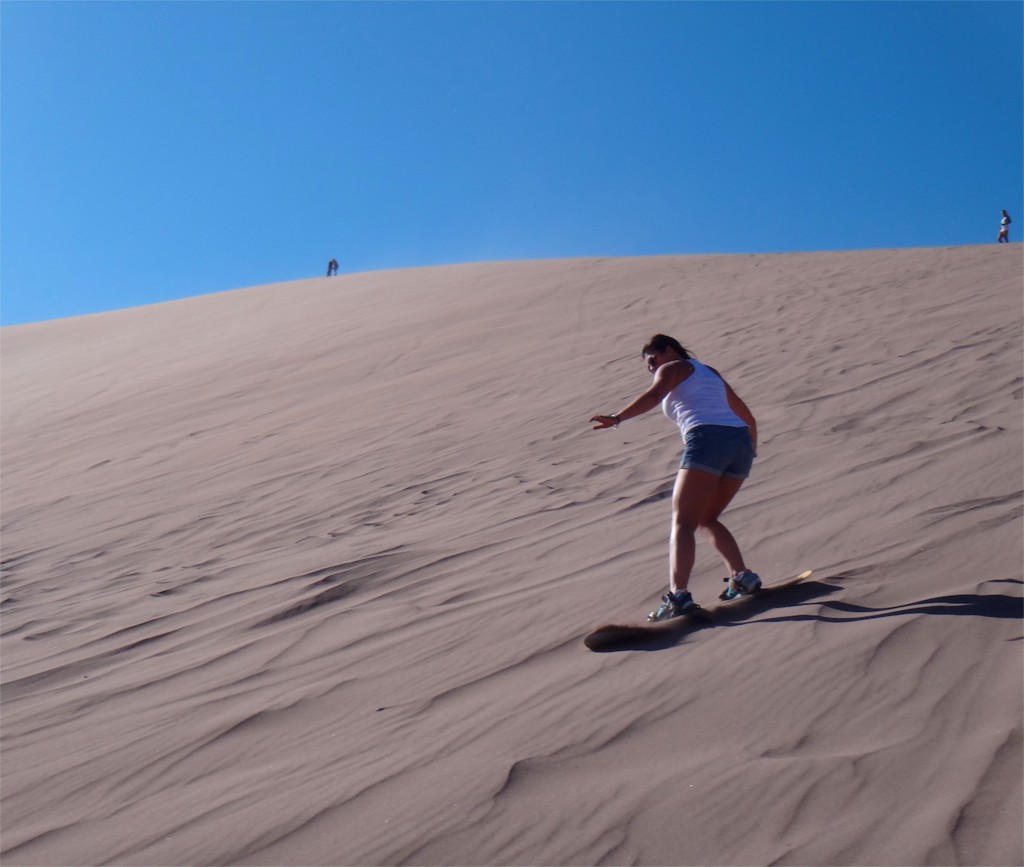 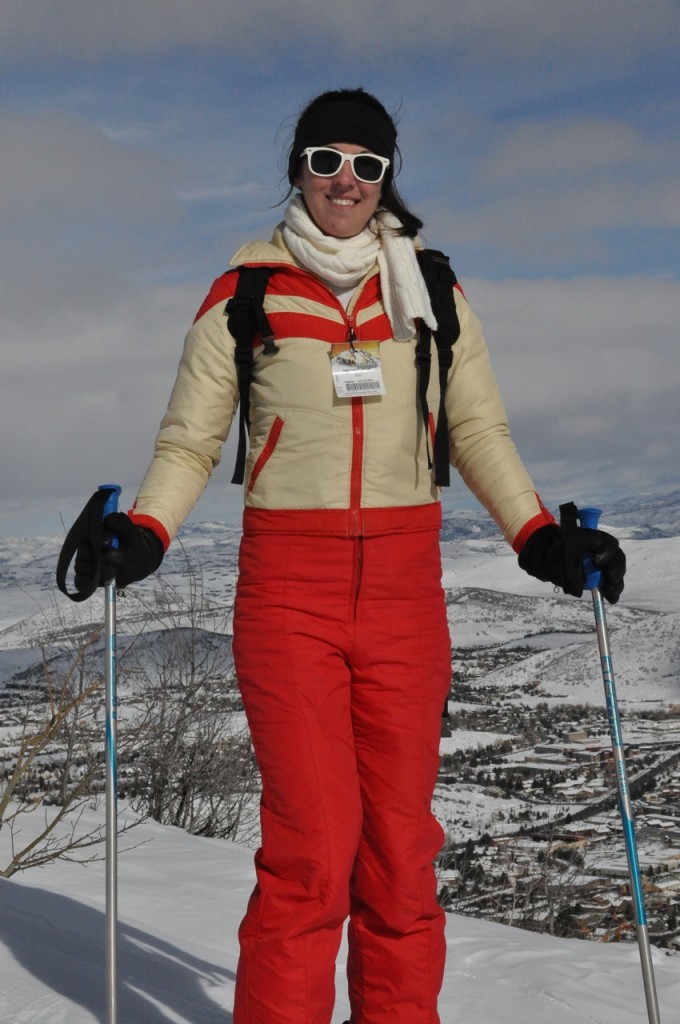 After sandboarding, we head to Valle de La Luna. Moon Valley is famous for its resemblance to the surface of the moon and is located in the Cordillera de la Sal in the Atacama desert. According to NASA, it’s one of the dries deserts in the world. Some places in the valley have not received a single drop of rain in hundreds of years. A prototype of the Mars Rover was tested in Valle de La Luna due to the harsh and forbidding terrain which is similar to that found in space.

Our first stop in Moon Valley was a visit to the Salt Mine. Here you can see the crystals of gem salt caused by the effects of the high pressure and the absence of humidity. We climbed through the caves, tasted salt and hiked up to the top where the surface is rocky and looks like the moon. We stopped to take pictures and all that we could say was, “We landed on the moon!” from one of my favorite comedies Dumb & Dumber. 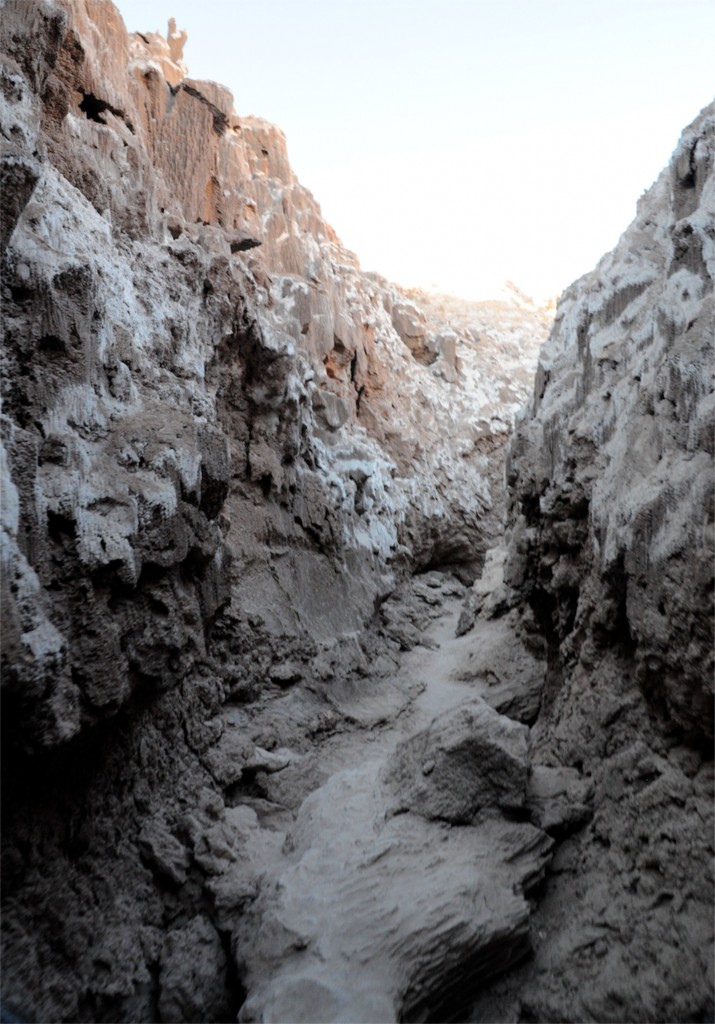 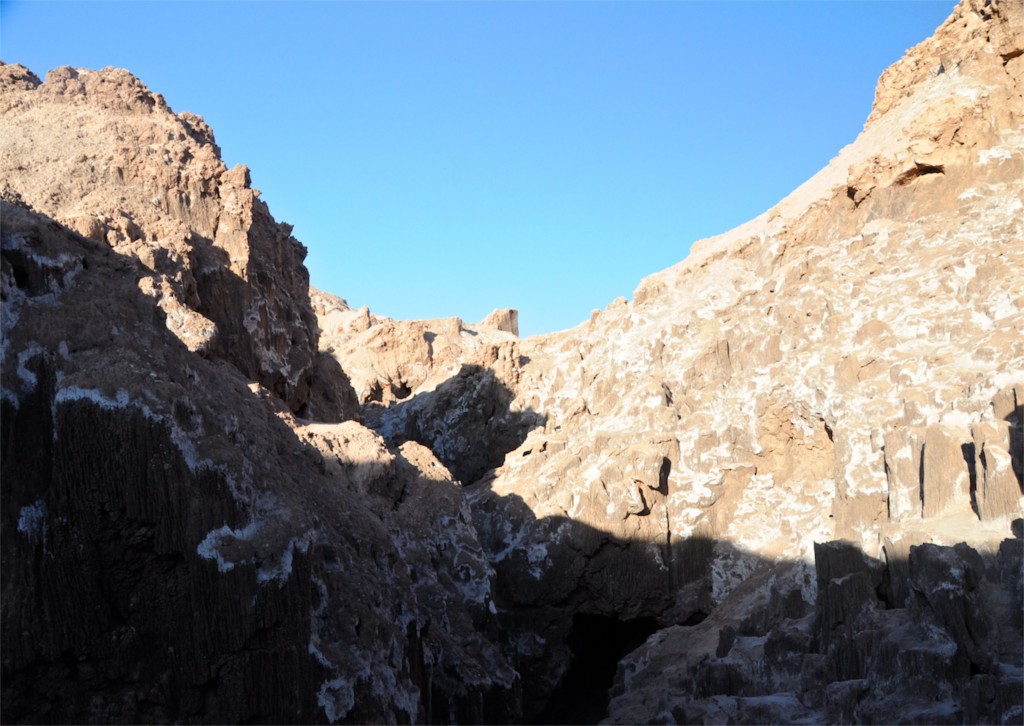 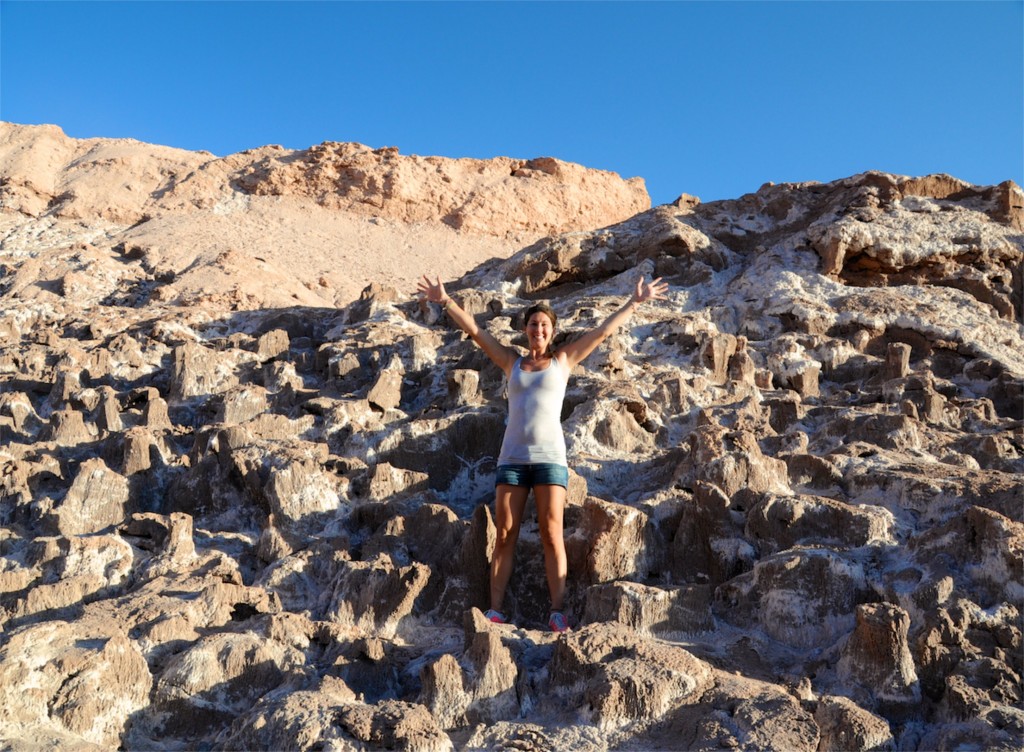 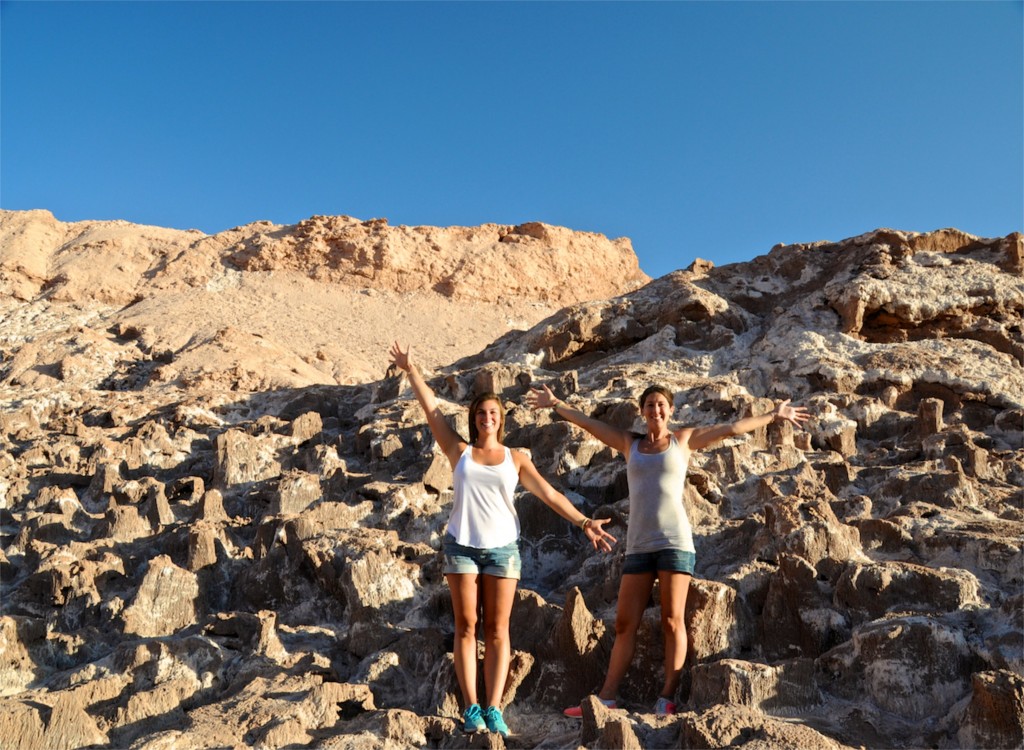 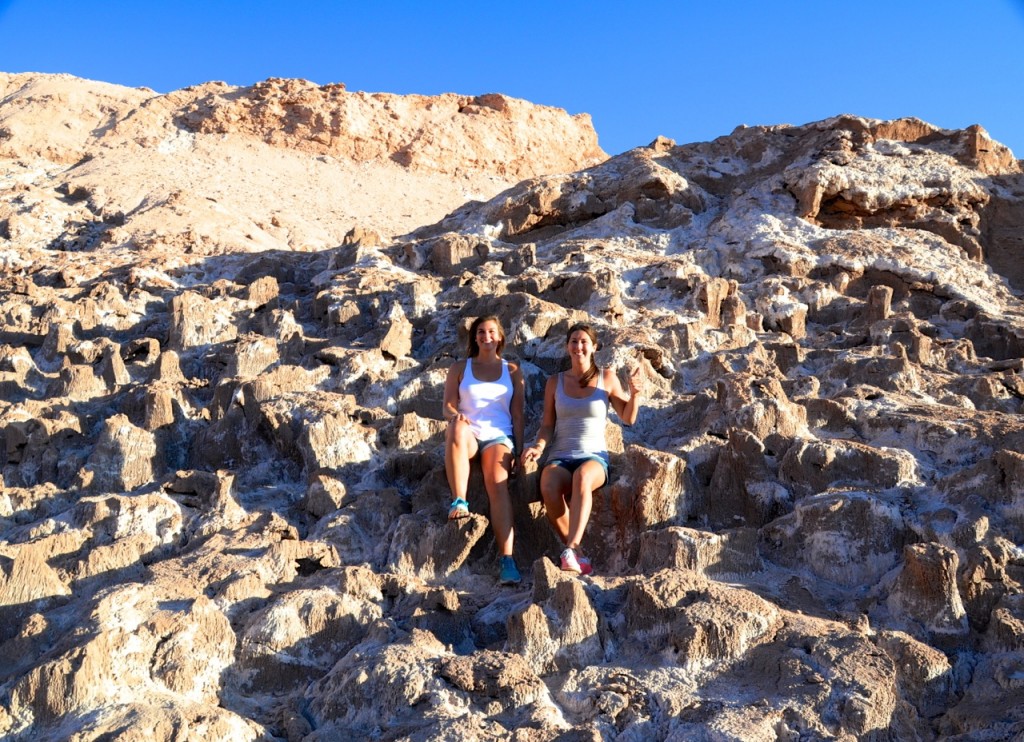 After the Salt Mine we headed to hike up to watch the sunset over Moon Valley. It was surreal…walking through the land to our spot on the ridge felt like not only another planet but also like we were the only people left on Earth. 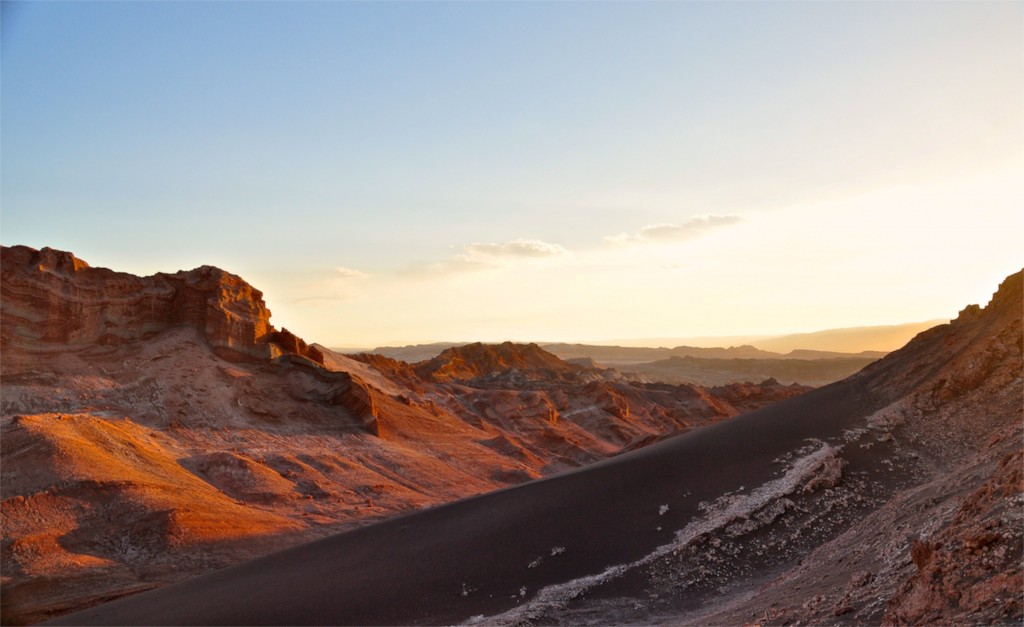 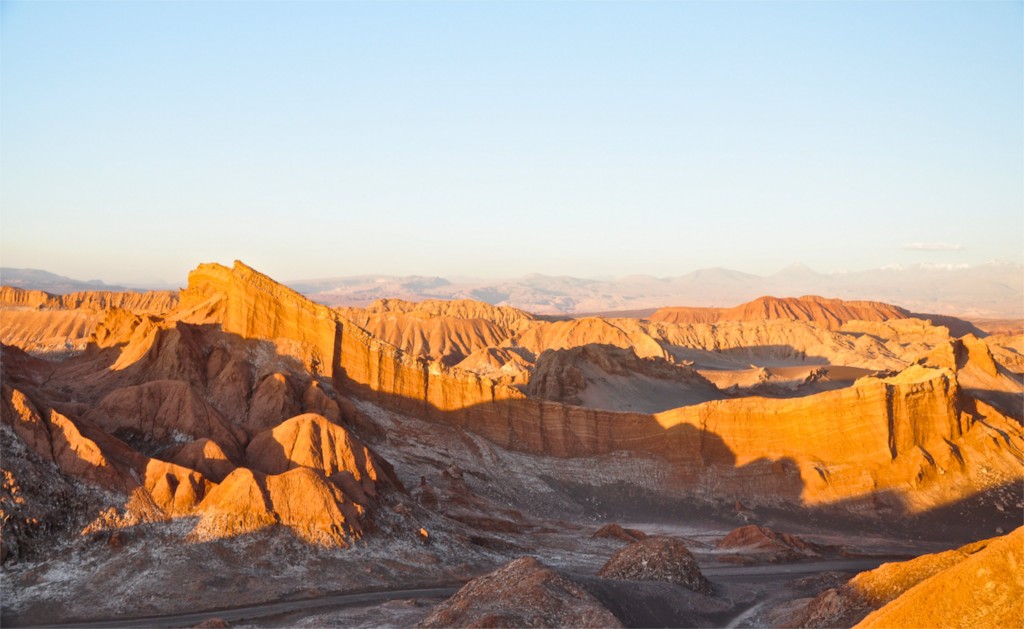 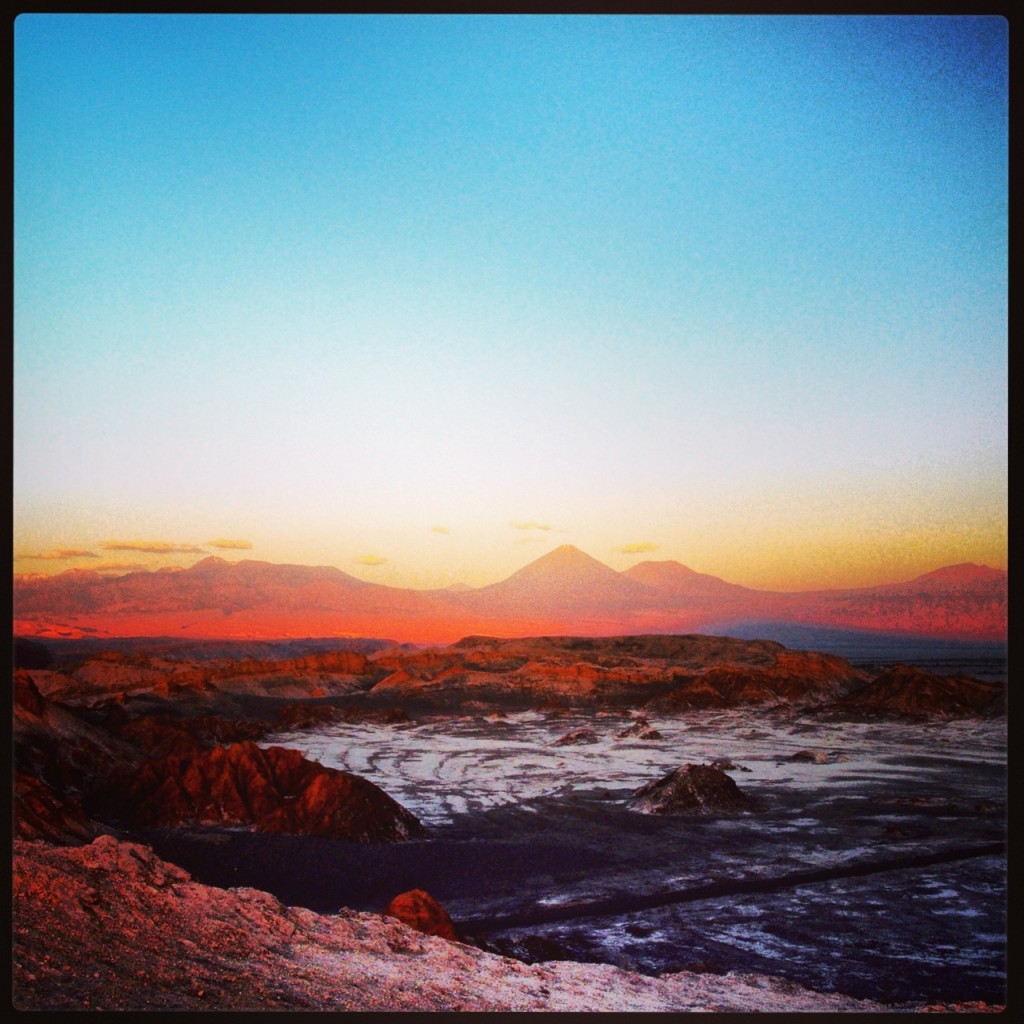 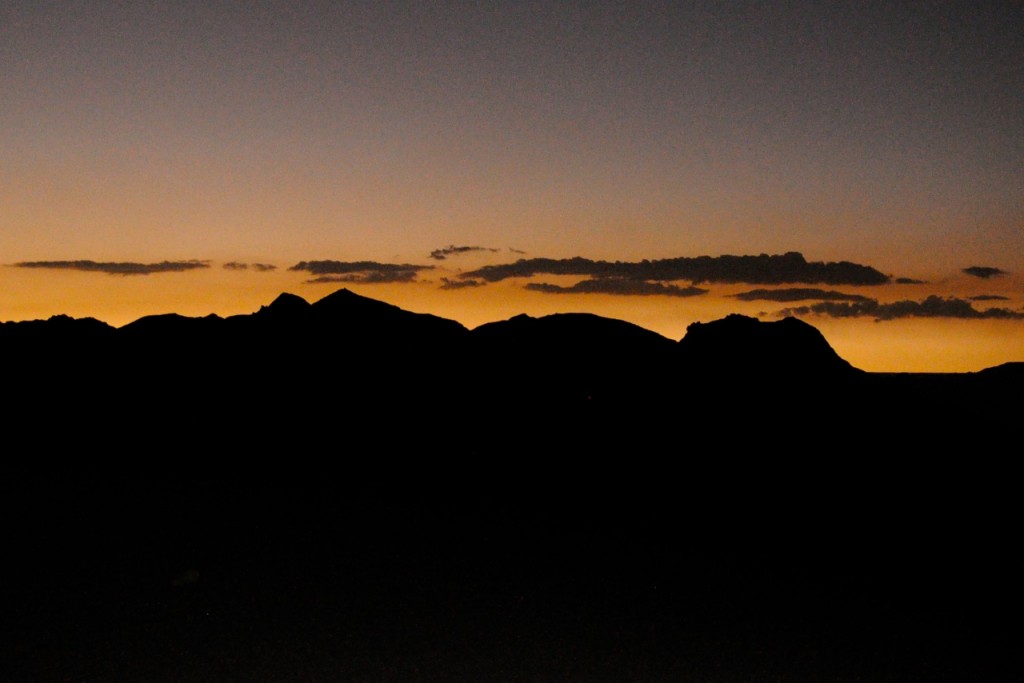 All in all, our guide Sebastian and Atacama Inca Tour ran a very fun sandboarding and Valle de La Luna tour. Well worth the extra 7,000 pesos! 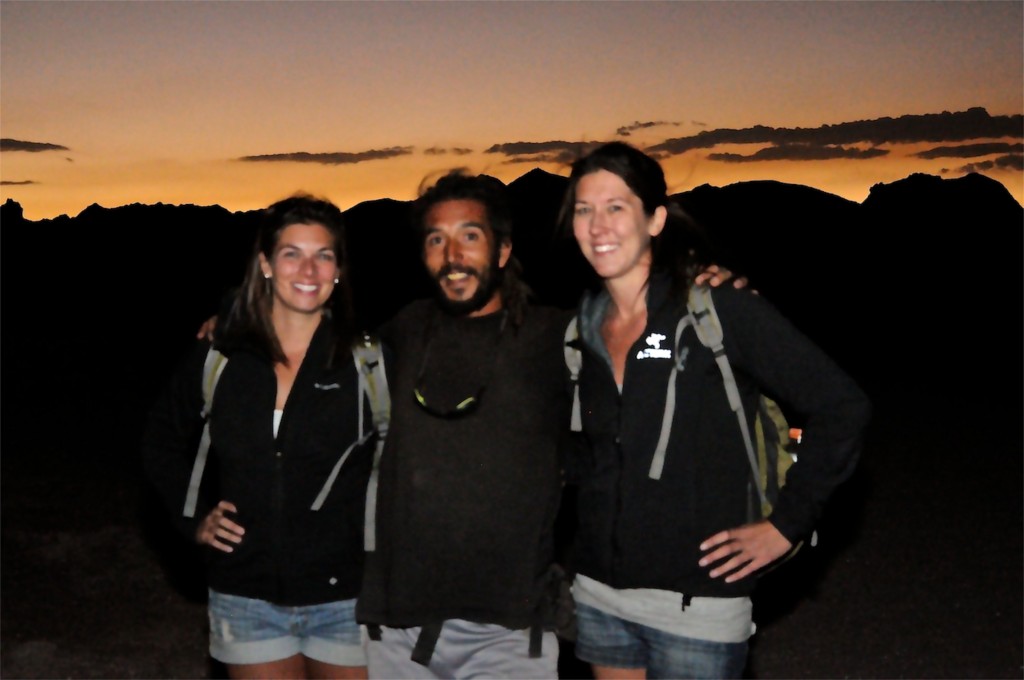 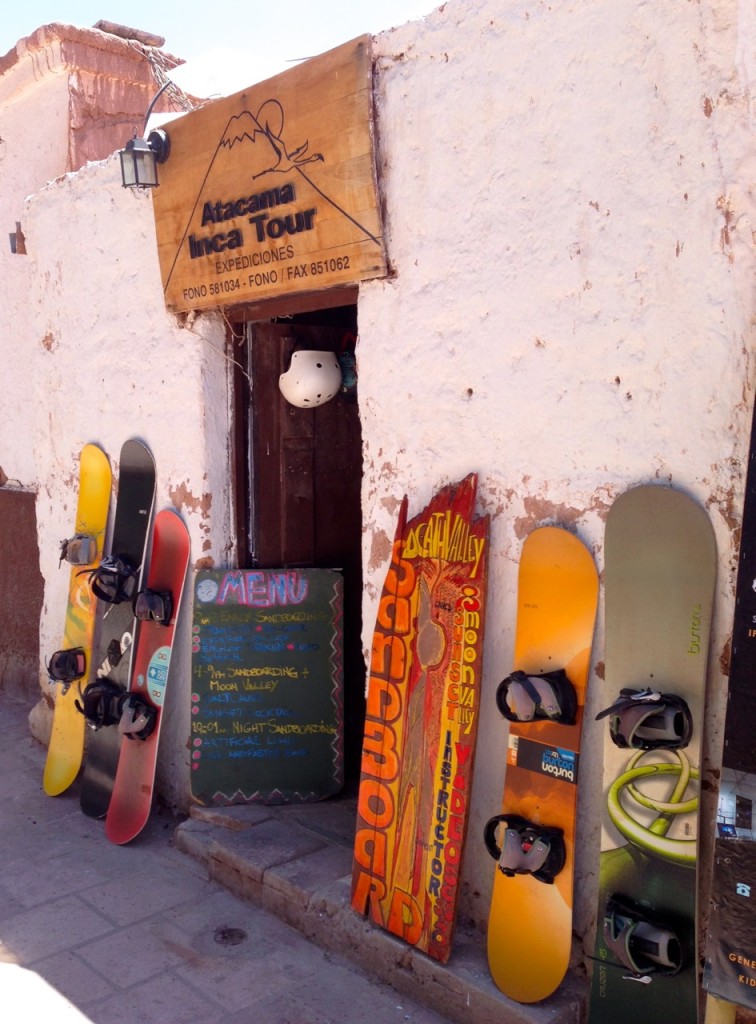