When I arrived back in Los Angeles, I was picked up at the airport by my friends Amanda and Lindsay, so one of the first things on my to-do list was picking up my car in order to get around town. My stuff and car have been in storage at a friends warehouse and being the MOST amazing people in the world, would drive my car once a month or so to keep it moving. They even gave me a new battery and a car wash when I showed up to get it. LEGENDS!

Since it was a Wednesday, all of my friends were working and the warehouse was located in La Mirada, I decided to take the bus. Even though I was staying in Santa Monica (34 miles & three freeways away), I figured I’ve just come from a year of taking public transportation and since I’m back in Los Angeles and fluently speak the language, how hard could the bus be?! I’ve actually never taken the bus in LA and a few times on during my travels I railed against the LA bus system to fellow backpackers, telling them it was essential to rent a car. I still stand by that statement, to an extent. In all fairness to the LA Metro, I did choose a city that while is still in Los Angeles county, is flirting with the Orange County line and driving to takes around 30-40 minutes with no traffic (key words: NO traffic). So…I knew it would be a bit of an adventure. 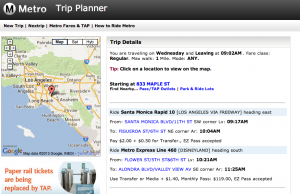 A few things I learned about the LA buses:

My first trip from Santa Monica to La Mirada was relatively simple; walk 1.3 miles to Santa Monica Blvd/11th and take the Rapid 10 to downtown, continue from Flower/between 5th & 6th on the Metro 460 to Disneyland, exit Alondra/Valley View and walk another mile. Easy, right?! When I saw the bus approaching down Santa Monica Blvd, I quickly snapped a photo with my iPhone (knowing I was going to write a blog post about the experience) and as soon as I got on the bus, I got a bit of an attitude filled, “Umm, may I ask why you took a photo of the bus?” from the driver. Reeeaal sassy tone, like I was documenting the journey to report her or something. I’m not entirely sure how I looked when I just smiled and cheerily said, “Because this is my first time taking the bus in Los Angeles,” like it was my first day of kindergarten or something. She lightened up a bit and we then came to problem number two. No change. All I had were twenties. Thankfully, after scrounging around my purse for a second, I realized I had thrown my extra travel wallet in my purse and it had three dollar coins left over from Ecuador. Sorted. Once I got downtown, it was an easy transition and a short wait until my bus came. From there, a smooth ride to La Mirada and after that another mile walk and I was there. I forgot I paid a transfer fee on the first bus and paid extra on the second. So I paid an extra dollar/dollar fifty for both buses in total. Relatively smooth and easy: yes. Timely and efficient: not so much. Total time from door to door was three and a half hours. 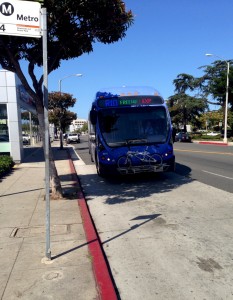 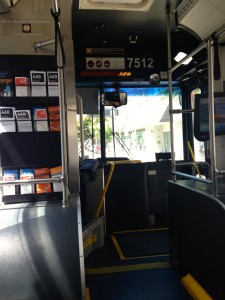 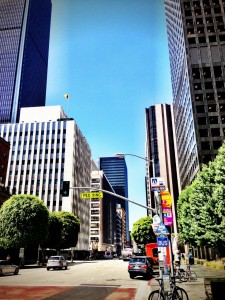 For my second trip, when I dropped my car back off at storage, I was offered a ride to the stop and eliminated the first mile walk. From there, the trip planner had me going back downtown to change, but the bus driver was extraordinarily helpful and told me a better route to take to get to Manhattan Beach, where I was staying for the next few days. She suggested the Green Line which runs down the center of the 105. I’ve actually always wondered about taking that during the few times I’ve found myself in standstill traffic on the 105 watching that train zip past. The journey started on the Metro 460 to downtown and (after my drivers sage advice) then I hopped off at the Norwalk stop to get on the Green Line towards Redondo Beach. From there, I got off at Douglas, walked across the street and got on the Beach City Transfer bus which goes straight down Highland. My second trip was much quicker and I got to Manhattan Beach in just under two hours. Not too shabby! 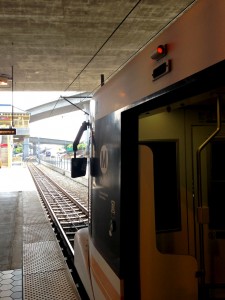 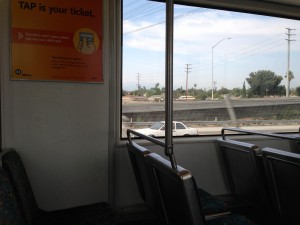 On my final day driving in LA (including getting to the warehouse to return my car), I drove on seven of the LA freeways (110, 10, 405, 90, 105, 110, 91) and considering all of this driving really only added up to about an hour and a half of driving, it just goes to show how many freeways are in LA. Sheesh. Incase you’re wondering, the 90 is my favorite LA freeway. There is never any traffic. Ever! I know this isn’t about the buses, but I figured a segue off into the freeways suited the topic.

A friend of mine who recently moved back to LA from NYC took the Metro over the weekend from the Westside to Burbank and this was a brief summary of his experience. Just to really give a full rundown of the LA Metro from two different perspectives.

I kept hearing great things about LA’s metro improvements since I last lived in Los Angeles. I recently moved back here from NYC and desperately wanted to cling onto public transit. Well, that and the lack of my own personal vehicle drove the decision, no pun intended. After an enjoyable day with friends at the beach, my ride home required a standard Bus > Train > Train > Walk routine. Taking the metro from the West-side to Burbank is technically impossible unless it’s during the daytime; because the Burbank rail is actually part of Amtrak and even worse stops running at 6pm. How convenient for the 9 to 5’ers. So I was prepared to take an alternate route, get 90% of the way home and then call a cab. Beginning my trek I lucked out with a car ride and skipped the initial bus to the Culver City Blue-line station. So far so good. When I arrived the train was waiting at the station, just as the online schedule said it would.  Next I was stunned, even at 11pm the trains were running 10mins apart. NYC doesn’t even have this convenience. Although what they DO have are clearly marked train cars!  When the A train pulls up, you know it’s an A train because of the big blue circle and large letter “A” posted on every train car. LA’s metro requires reading glasses to make out the dimly lit LED screen made from refurbished Etch-a-sketch parts. As a result, when it was time to transfer onto the Red-line downtown, I mistakenly got on the Purple-line which runs on the same track and eventually splits to the south. It was one of those situations where the next train was pulling up just as I was racing down the stairs… and you feel like a bad-ass because you jump into the next train just as the doors slide closed. Listening to my iPod and being a navigation know-it-all, I missed a few announcements stating this was a Purple-line train. Despite the music, I’m still able to make out one common phrase you never like to hear when commuting, “This is the last stop, be sure to locate all of your belongings and exit the train”. Myself and another man made the same mistake, we looked at each other simultaneously and said “I thought this was the Red-Line?” Luckily we were only two stops past the split, not exactly the end of the line. So yes I had to double back and wait for the next train in both directions… urgh. When I eventually surfaced in Universal City fifteen minutes later, I was pleasantly surprised that taxis queue here and I did not have to call and wait. If I had taken a taxi all the way from the Marina to Burbank, I could have paid close to $100. My total trip was a $15 cab, $2 tip, and $1.50 train ride + some interesting sights and sounds you can’t make up, and less than an hour long. (experienced and documented by Grant Werle)

Overall, I’d say that the LA Metro isn’t the most efficient way to get around Los Angeles, especially when trying to get to certain areas (i.e. beaches to the valley), however they have made some pretty decent improvements. So if you happen to live in a really convenient location, maybe taking the Metro isn’t all bad. Or, if you just have a lot of time on your hands and like riding buses. Just make sure you don’t forget to have change! 🙂