I set out sightseeing with my friend Jean who was also in London visiting. Jean and I originally met while Danielle and I were in Cape Town and I was delighted to find out that his trip to London would align with my first week. Our original plan for the day was to head over to the Royal Victoria stop off the DLR and take the Emirates Cable Cars down to North Greenwich. After the cable car, we would hop on the Thames Clipper and head to Greenwich to walk around the park and stand on the Prime Meridian. Once we were on the boat to Greenwich, we realized that we’d already taken five forms of transportation and it wasn’t even noon. We then decided it was an excellent idea to see how many forms of transportation we could take before the day was out. At this point, we’d ticked off bus, tube, DLR (okay, so some might consider this the same as the tube, but we didn’t since it has its own name), cable car and boat. 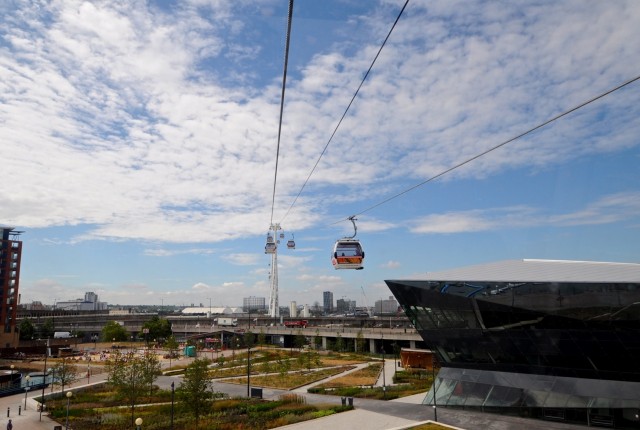 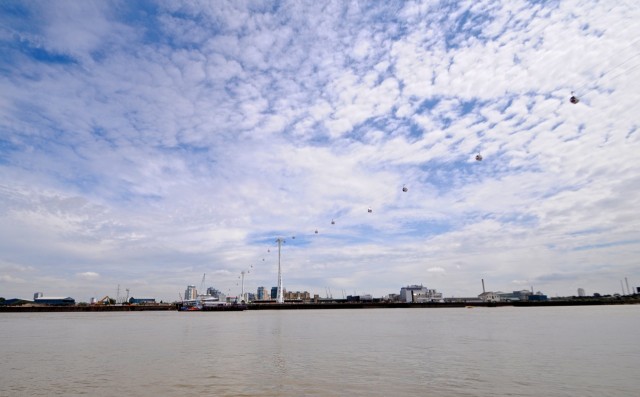 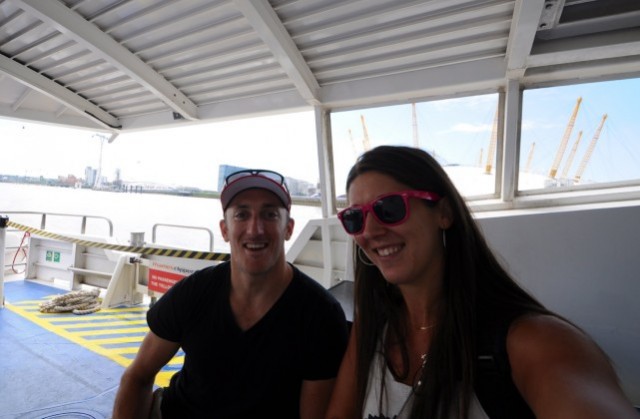 When we got off at Greenwich, our first stop was the Maritime Museum. The fun continued when we stumbled upon a submarine. When we told our friends about this later, they didn’t think we should count this mode of transport, but we did ‘ride’ the sub from India to Africa…transport type number six. As a side note, we had to kick some very young children off of the sub in order to ride it and get our picture taken, but in the long run, it’ll help them, as they need to learn the importance of sharing. 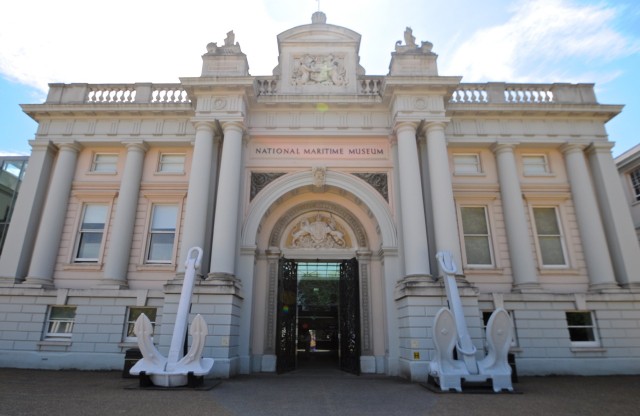 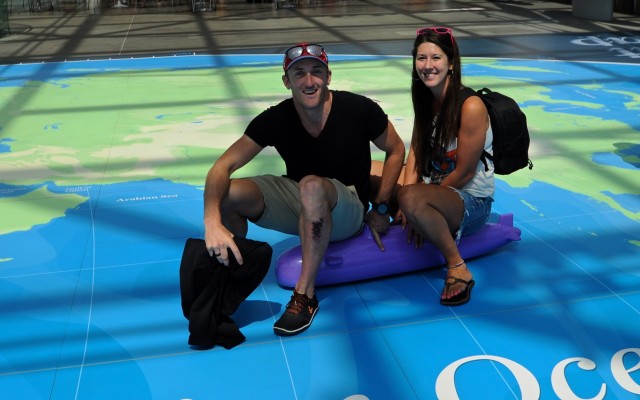 Next, we headed to Greenwich Park and the Prime Meridian. We didn’t actually pay to go into the Royal Observatory and stand on that part of the line, since it cost seven pounds. We felt that since you could stand on the line directly behind and below that point for free, we’d rather do that and save our money for some pints. 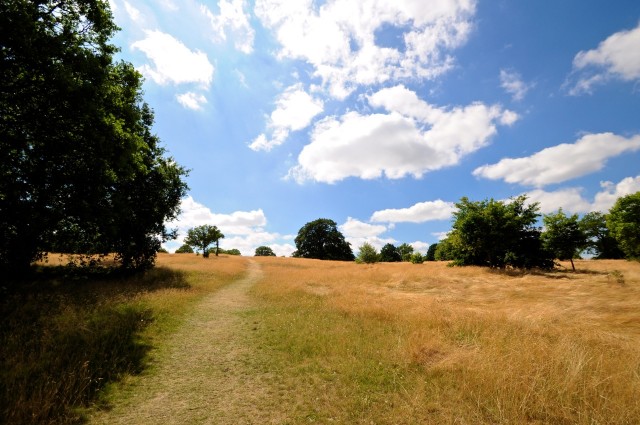 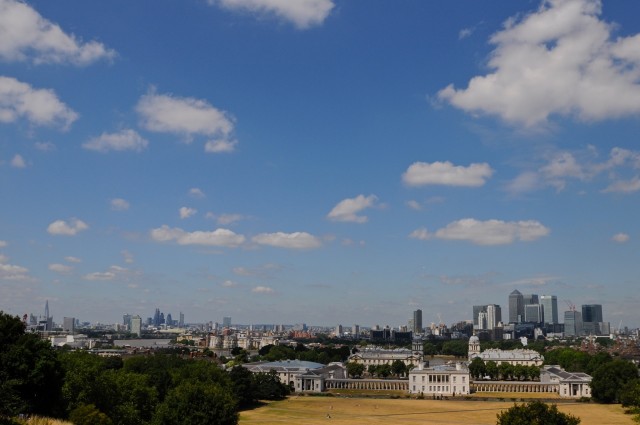 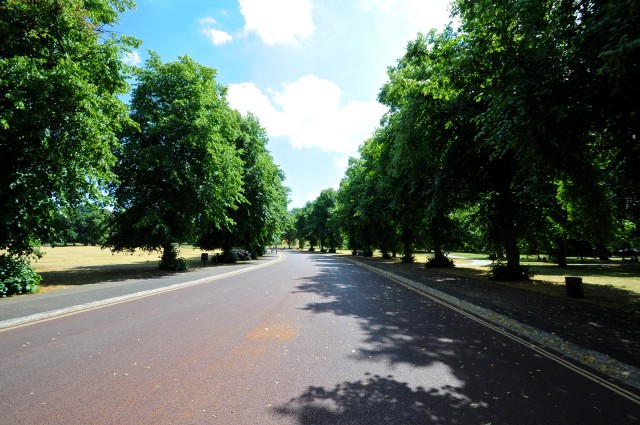 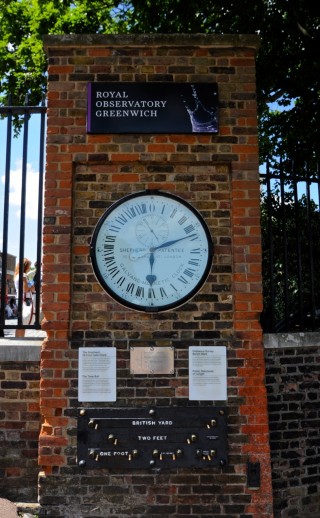 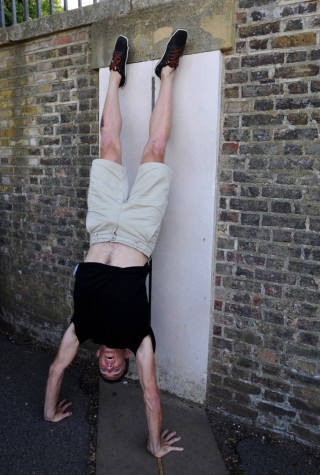 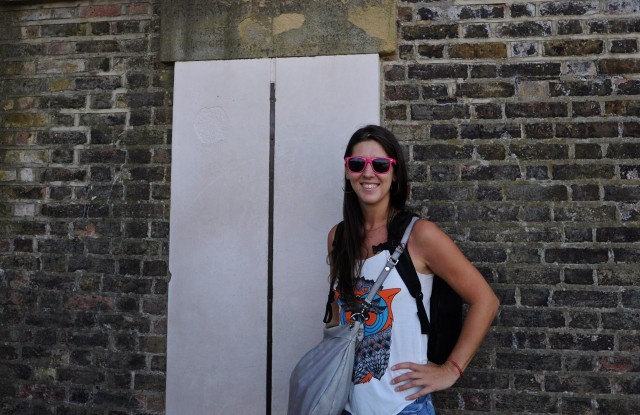 Back to the transport. After we strolled around Greenwich, we were heading back to the Thames Clipper when we came across some kids on skateboards. Naturally, we asked if we could ride and thankfully, they obliged us. The skateboard really showed off our superb balance skills. Number seven, check. 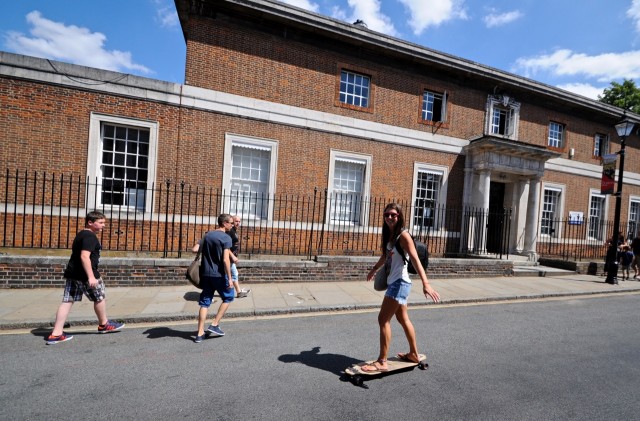 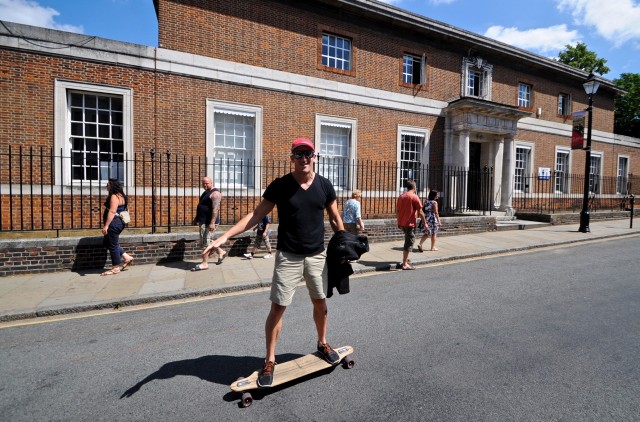 Next up, we headed to The London Eye. Now, the London Eye doesn’t actually do anything but transport you about four meters backwards, but it IS something. So we counted it. At the Eye, we chanced upon a strange hand of luck, as Jean was sold two Fast Track tickets for £15 when they normally cost £29. The regular tickets cost £19 on the day of, so until we boarded the Eye, we were really unsure if this Eastern European tourist had given us a steal of a deal or just taken us for a ride. Turns out they were legit and we not only saved money, but save about an hour of standing in a line. We had now reached transport mode number eight. 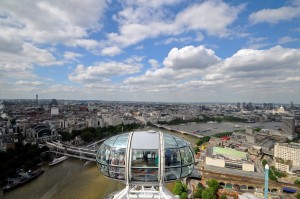 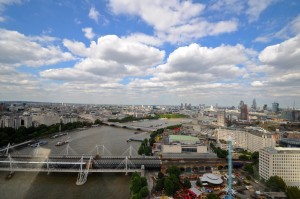 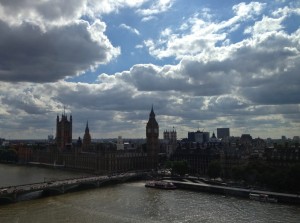 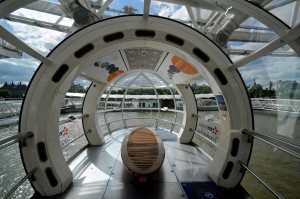 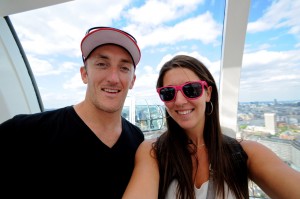 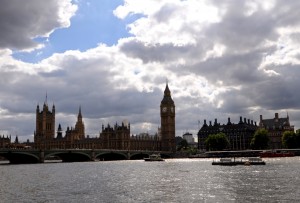 For transport number nine, we rented Boris Bikes and biked around Central London just enjoying the sunny summer day. We toyed with ‘riding’ the lions in Trafalgar Square but couldn’t be bothered with that idea when we saw the amount of folks crowding around and taking photos on them. Jean was able to perfect his no handed biking and redeem himself some after being school by Danielle in the no handed riding department when we were biking around Cape Town (then again, she wasn’t biking with us in London, so perhaps he lucked out…). Naturally I snapped some action pictures while biking, as perfected by years of biking along the beach in the South Bay, Santa Monica and Venice. Fun stuff. 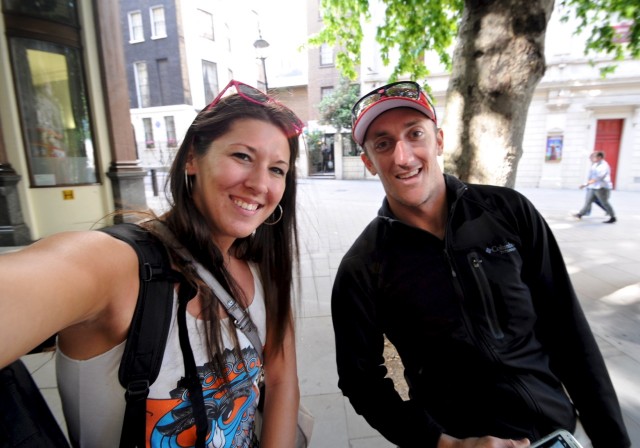 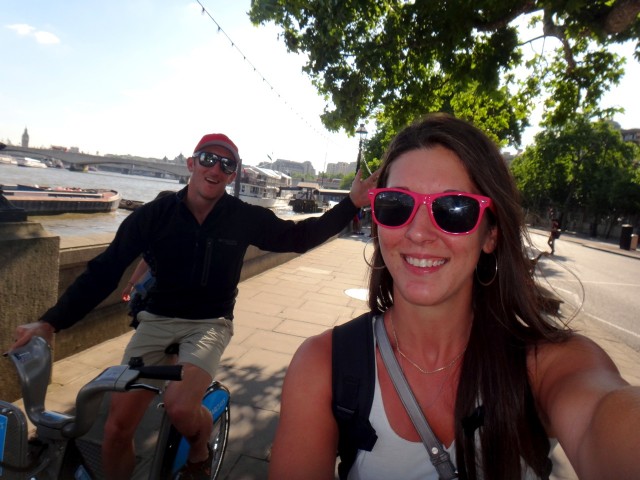 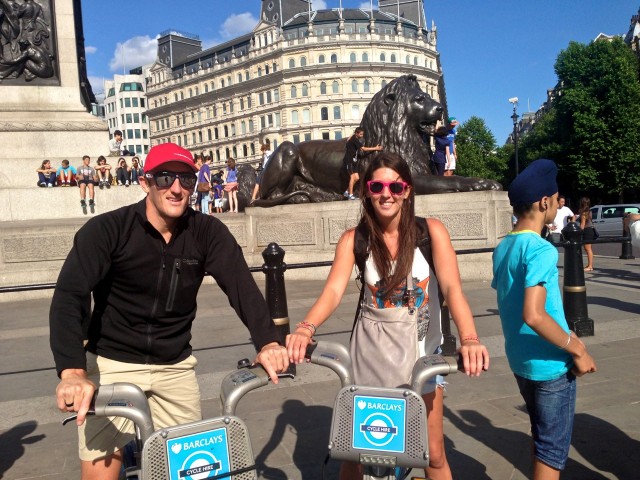 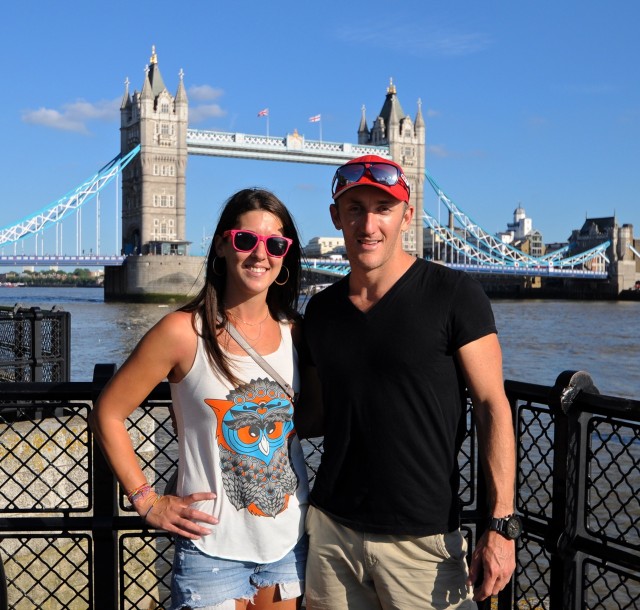 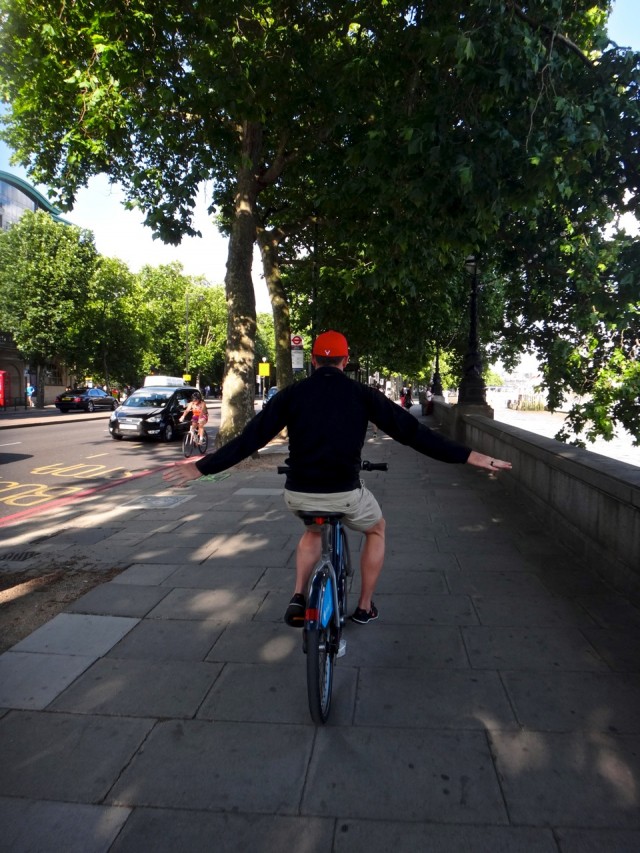 At the end of the day, we headed to meet up with friends for a curry dinner on Brick Lane. We had walked around all day but since we walked from the Tower Bridge to Brick Lane, we decided walking would be our tenth and final form of transport for the day. We figured if we had started our plan a bit earlier, we could’ve easily reached 15, as we still had left: black cab, bicycle cab, horse & carriage, scooter, motorcycle, car, etc. The possibilities are endless. Well, perhaps not endless, but it certainly made for a fun day!