Early this week, I shared the backstory and history of my love affair with macarons and today for #BakingWithBeth recipe number six, I’m going to share my go-to Italian macaron recipe. As well as my favorite macarons I’ve ever created. There will also be a bonus recipe with my go-to French macaron recipe in the coming days.

Macaron comes from the Italian word maccherone or macaroni, which means fine dough. Almond paste was the main ingredient in the macaron. Macarons were introduced by the pastry chef of Catherine de Medicis in 1533 during her marriage to Duc d’Orleans, who went on to become Henry II as King of France in 1547. At the beginning of the 20th century, the macaron became the two-cookie sandwich classic that we love today. Pierre Desfontaines, the grandson of Louis Laduree (one of the most famous macaron makers in France) came up with the idea to fill two macaron cookies with chocolate. And thus the start of the macaron craze was born. Well done, Pierre!! 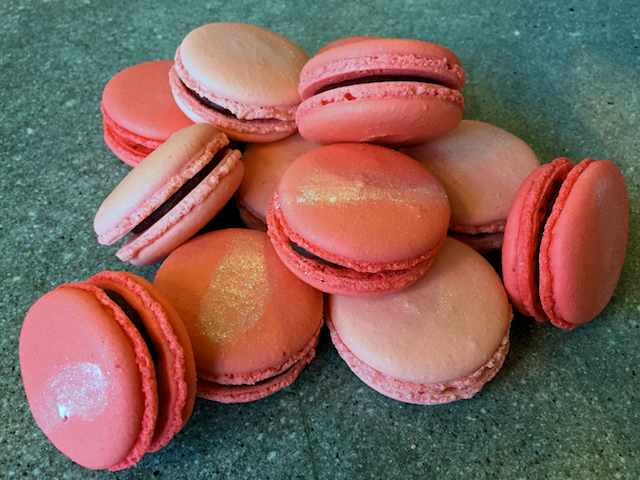 Italian macarons are favorited within patisseries and restaurants because the meringue, which involves adding a boiled sugar syrup to your whipped egg whites, is more stable and provides for more consistency. Italian macarons are more technical, but once you get the hang of it, it’s nice to be able to go back and forth between each method.

Italian macarons, and macarons in general can be a finicky bunch. Real talk – I’ve made thousands of macarons, and lately, I’m struggling. Unless I’ve just lost it as a pastry chef (likely not the case), I believe I’ve narrowed my problems down to the terrible weather we’ve had lately. I know California needs the rain, but it’s been a really wet winter, and the past few days, my house has been in a constant mist/marina layer with humidity at 98%. I think my oven may also contribute as well, but I’m working against two variables that I can’t easily control at present. (My landlord has unfortunately just sold our place, so a move is in the near future, which may end up being a good thing for my macaron self-esteem!)

Aside from the frustration of wasted time and ingredients, the plus is that I’ve been spending an insane amount of time studying the science behind macarons and ingredients involved (Helloooo, incredible, edible egg!!), so ideally, I’ll be even better down the road with my new knowledge. Running into problems in baking can be a great thing, as it gives you a chance to break down the process and understand the why from every perspective. If we never ran into problems, we might not be as knowledgeable about why things work.

My point is, if you try Italian macarons and they don’t work, don’t give up! Like the childhood proverb, “If at first you don’t succeed, try, try again!” Same with French macarons. It’s a process. A learning curve. As my friend (a more talented pastry chef than myself) put it to me (mid-mac crisis), even the best, professional chefs have issues with macarons. It’s a science and an art! And sometimes science experiments fail. 🙂

Today, I’ll be sharing an Italian macaron recipe with a basic chocolate ganache. In the near future, I’m working to create an entire section on Recipe for Adventures dedicated to macarons and variety of ganaches and fillings. I’m also working on a video documenting the process and happy to Skype or FaceTime anyone in need to walk you through the steps!

Before we get to the Italian macaron recipe, here’s a look at my favorite macarons I’ve ever made. In no particular order.

Last January, I planned and catered the dessert bar for my Grandpa’s 90th birthday. I didn’t get as many ‘beauty’ shots as I wanted because catering a dessert bar for 60 out of my mom’s kitchen was, well, there was no time for all the baking production and photos. The macaron selection included cassis (black currant) with white chocolate, which was one of my favorite flavors. Vanilla and raspberry dark chocolate rounded out the assortment. Just seeing my Grandpa eat a plateful (and leftovers) made these more special, regardless of the flavors. 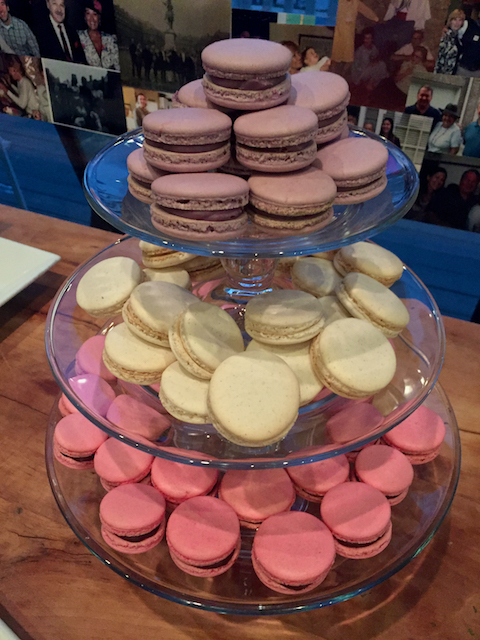 The gingerbread macaron was one of my holiday pop-up flavors and probably my favorite one of the bunch. Mainly because I created the gingerbread ganache recipe myself and it was the first time I added some spices to the shells. Plus, if you like gingerbread cookies, they tasted exactly the same, but in a lighter macaron kind of way. 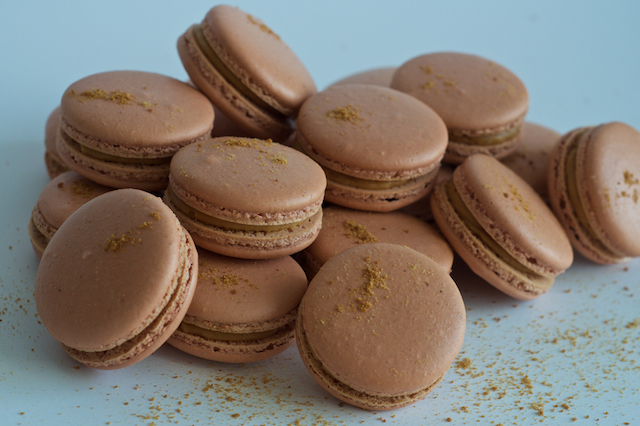 Also from the holiday pop-up flavors was the hot chocolate macaron. My brother Paul helped inspired this flavor which was a Italian macaron shell dusted with cocoa powder and filled with a chocolate ganache and homemade marshmallow fluff. One of the more popular flavors sold! 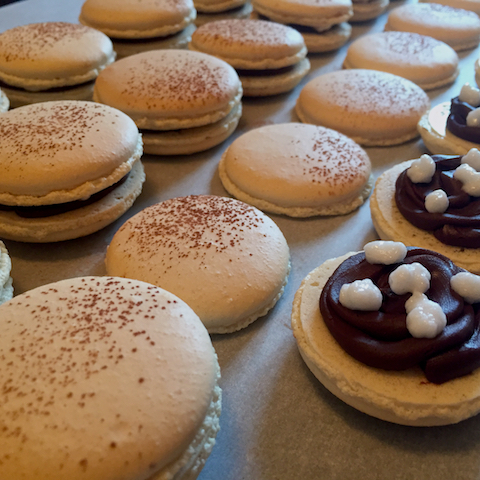 The bourbon peach pie macaron was another flavor I developed from scratch based of a combination of a tart, cobbler and pie recipes I love. Plus, what kind of Georgian would I be if I didn’t have a macaron to dedicate to the Peach State?! Looking forward to peach season to create other varieties of Peach macs! 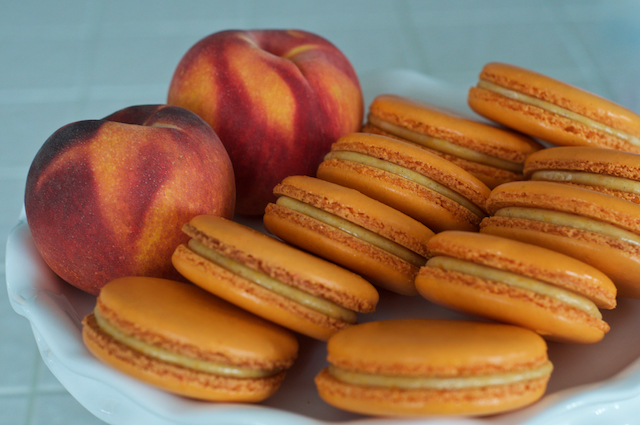 Creating an Oscar shaped macaron is something I’ve been trying to work out for months. Last month, I ordered myself an Oscar statue cookie cutter and got to work tracing an outline. They were slightly trickier to pipe than I had anticipated, but overall, I like the Oscar macs. The fillings were a celebratory mixture of a champagne lemon curd and champagne dark chocolate ganache. Contact me for custom orders if you’re planning on hosting an Oscar party this year! 🙂 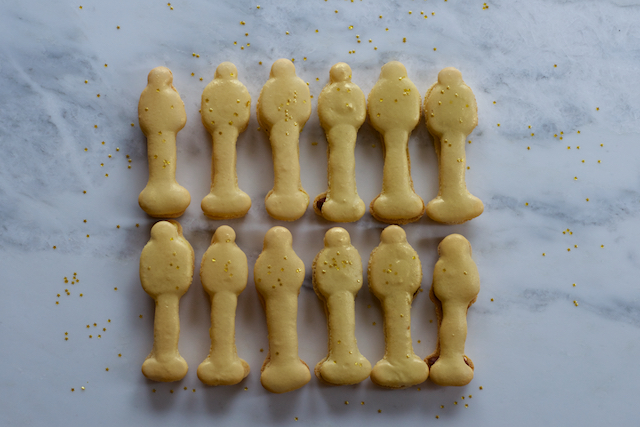 After the Oscar macarons, my sorority sister from Georgia Tech, Lindsay asked if I was going to make ‘Falcaron’ macarons for the Super Bowl. I mean, the names were just asking to be married. I was planning on Falcon macs, but not in the shape of the Falcon. One suggestion later, the wheels started turning and the Falcaron was born! The Falcaron might be the macaron I’m the most proud of ever making. I love them, despite the outcome of the Super Bowl (tears!). They will be perfect sweet treats to help the Falcons Rise Up and kick off next season! 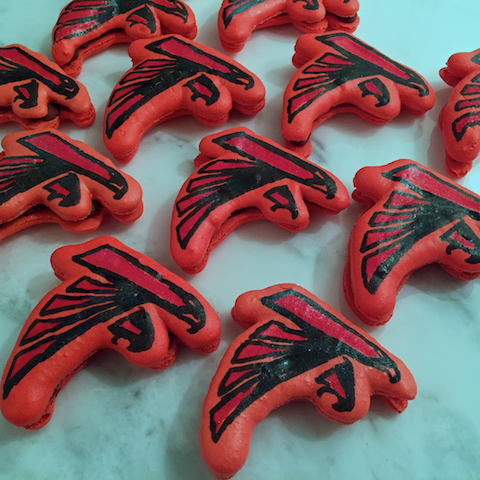 Be sure to follow along Instagram and Facebook and tag #BakingWithBeth so I can see all the fun treats y’all make! I love, love, love seeing pictures and hearing the feedback so far. Keep it coming! 🙂

What do you think… have y’all had previous success with Italian macarons? French macarons? Any particular filling a favorite of yours? 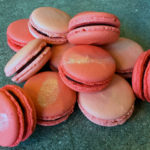 Disclaimer: Please note some of the links are affiliate links which will not incur any additional cost for you, but help with the maintenance of this site.