For the 2017 Academy Awards, I was commissioned to cater an annual Oscar party. No, not the Governors Ball but the coveted invite-only Jewels & Jammies 2017. A themed Oscar menu was planned to represent all nine Best Picture nominees. As with an good themed menu, puns were involved.

Following pastry school, I’ve been hired here and there to create dessert bars and desserts for specific events, but as I’ve become a freelance pastry chef, this was my first event to be hired to cater the full thing. Very grateful and humbled by the support and trust of Tressa and the Jewels & Jammies crowd.

First steps of planning a themed Oscar menu involved listing each movie and figuring out each dish. For prep, I was able to squeeze in six of the eight films. For the nominees, a mix of sweet and savory was created, though more heavy on the savory side because I was planning for a few bonus sweets. I mean, what kind of event would I be catering if they didn’t include macarons (one of my favorite pastries to make!)?! For an Oscar macaron, champagne & lemon seemed quite fitting and it was used as a filling in both traditional macs and the more festive Oscar statue mac. Featured below walking the red carpet are this years Oscar Macs. Who wore it best? 😉 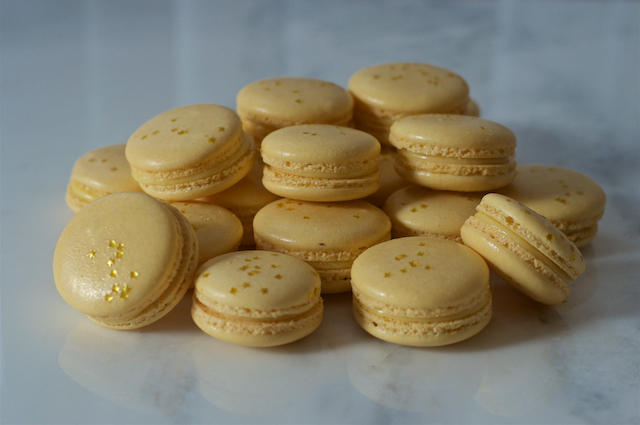 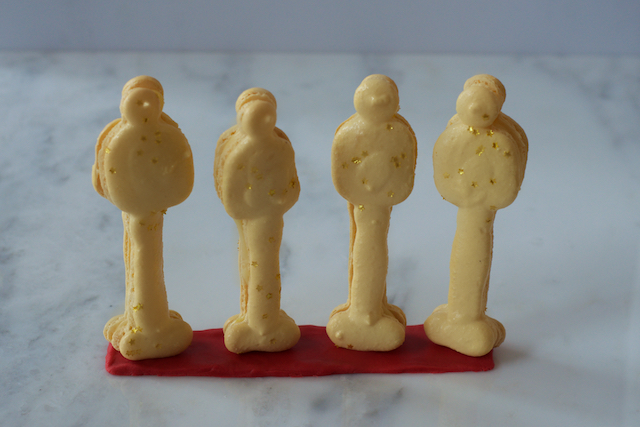 Here’s a preview of nearly the whole themed Oscar menu spread (the guests had already started in on the food at this point) before we break down each themed Oscar menu item dish by Best Picture nominee dish. And of course, as with any celebratory occasion, champagne flute sugar cookies were on hand to toast each winner. 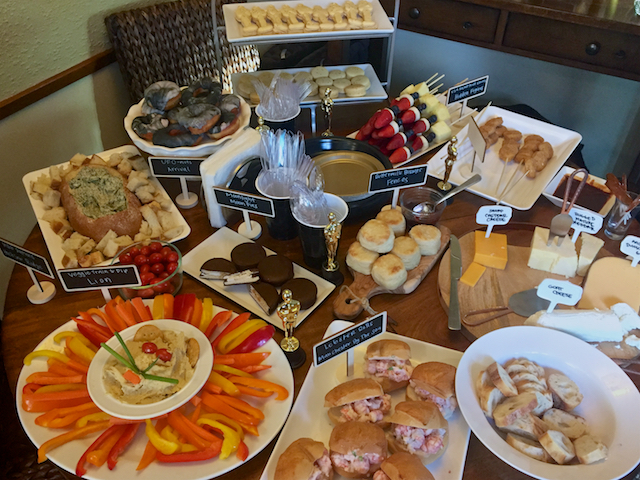 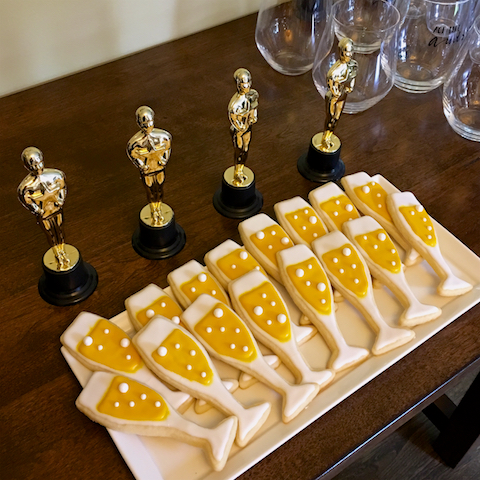 Kicking off the Oscar food with one of my favorites of the night. Arrival takes place around a linguistics professor communicating with 12 alien spacecrafts that have landed on Earth (one of two of the nominees that I haven’t seen yet). To represent Best Picture Nominee Arrival, UFOnuts with a galaxy marble glaze seemed like the perfect option. One because doughnuts. Two because marble glaze is so on trend, but it’s also really fun to create marble baked goods. And three, I love a good pun. So, so much. These brioche UFOnuts are out of this world. 😉 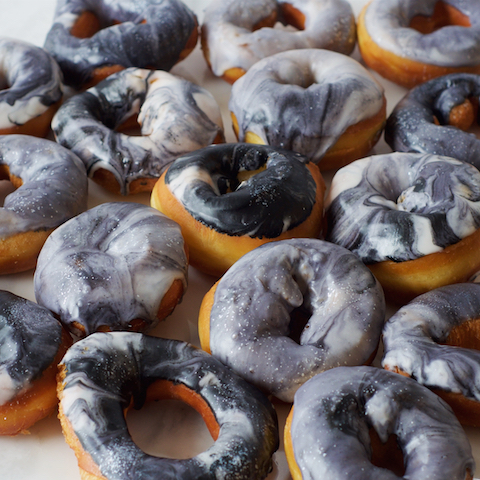 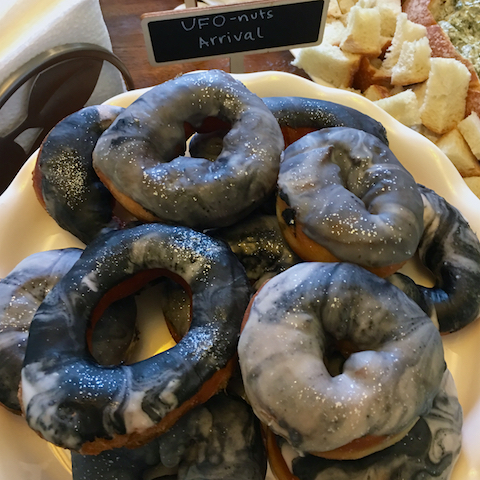 Fences, set in 1950s Pittsburg, is the film adaptation of the Pulitzer-Prize winning play by August Wilson. Best Supporting Actress Winner Viola Davis’ character Rose made buttermilk biscuits in Fences for her husbands WWII veteran brother, Gabe, who suffered brain damage during the war. Gabe is at their house for meals through the film. As a Southerner, I was oh so happy to include buttermilk biscuits (with a strawberry cherry jam) to the menu! 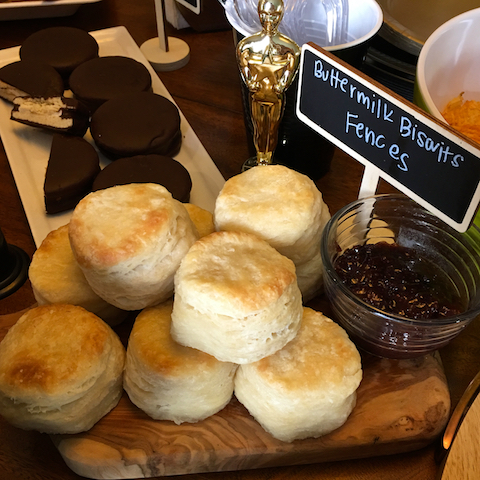 The second of the eight that I haven’t seen yet, Hacksaw Ridge is about a Pacific unarmed medic serving and saving dozens of lives during the WWII Battle of Okinawa. Representing WWII and Hacksaw Ridge, MRE rations were served in the form of bread and spinach dip. And a cheese platter, because what’s an Oscar party without cheese!? Okay, we used MRE’s a bit liberally here. 😉 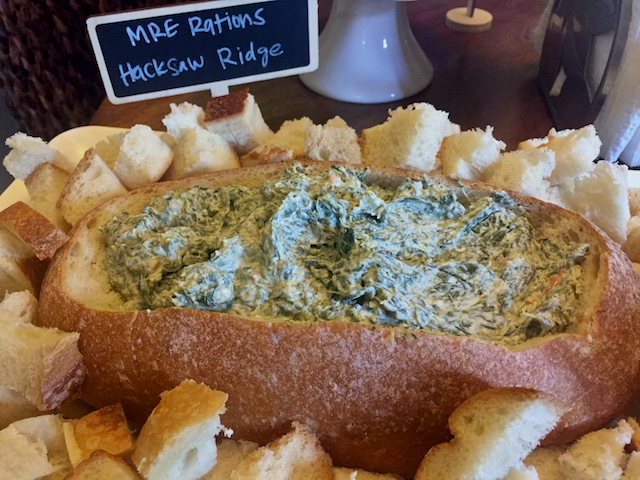 Hell or High Water takes place around two brothers robbing branches of a West Texas bank to prevent foreclosure on their family farm. It seemed only fitting to include whiskey and sweet tea, and the Hell or High Water & Whiskey Sweet Tea was born. Infused with some fresh lemon juice and mint! Perfect post-bank robbery cocktail. (ed note: please note I am not condoning robbing banks!) 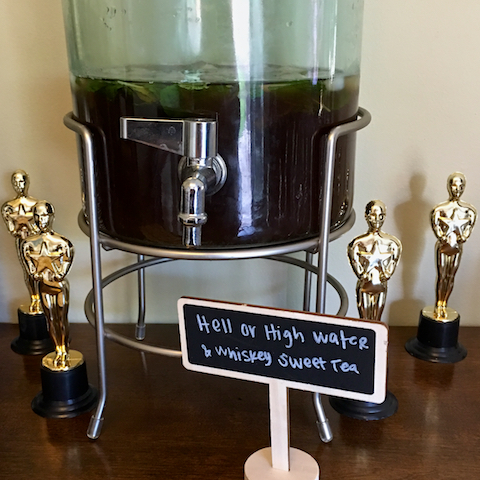 I loved this story! One of the few feel-good movies in a pretty heavy line-up this year. Hidden Figures tells the story of the 1960s US space race against the Soviet Union and three brilliant African-American women (Katherine G. Johnson, Dorothy Vaughan and Mary Jackson) who helped NASA launch John Glen into space. In honor of the achievement, USA rocket ship fruit skewers were created to showcase Hidden Figures. 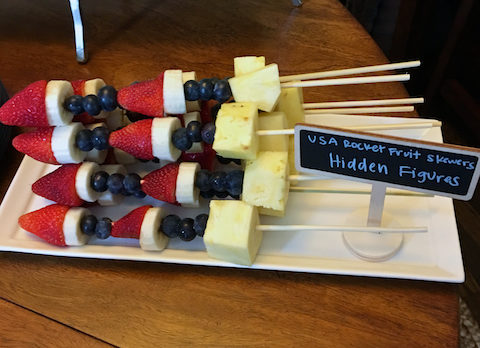 Award season darling, La La Land follows aspiring actress Mia and jazz musician Sebastian as they struggle to realize their dreams in modern day Los Angeles. The movie follows them through rejection and unexpected paths to the spotlight. If you haven’t seen La La Land, chicken on a stick might seem ridiculous and unrelated, but in the film Sebastian hopes to name is jazz bar as a tribute to Charlie Parker. La La Lollipops were thrown in as a bonus sweet treat to accompany the musical. 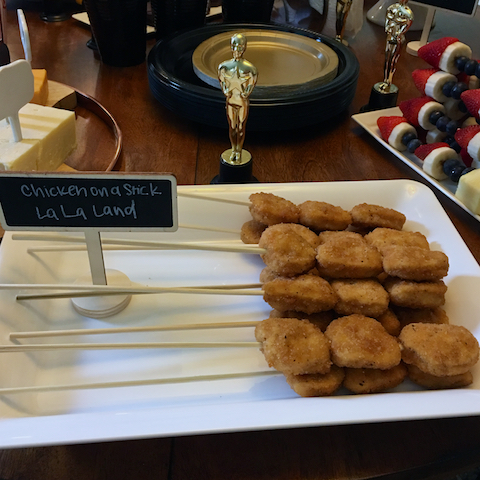 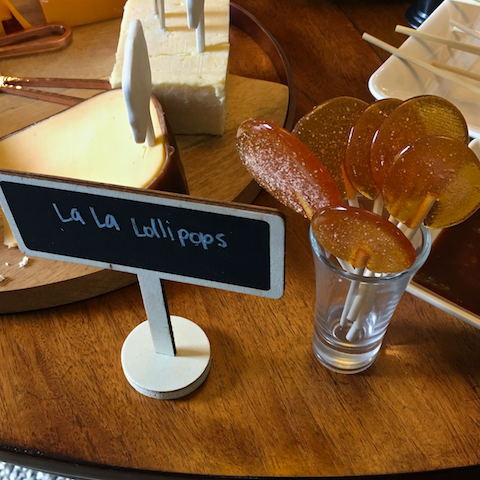 Lion is based on a true story about a five-year old boy who gets stuck on a train which takes him thousands of miles away from his family across India and eventually adopted by an Australian couple. Twenty five years later, he struggles with memories of the past and using Google Earth, he attempts to find his family. My first instinct after seeing the movie was to make jalebi, a fried flour batter spiral soaked in sugar. However, with all the other sweet treats, we opted for a Lion (faced) veggie train with homemade hummus. Bit of a stretch, but it was cute! Just as cute as the adorable Sunny Pawer, who played little Saroo. 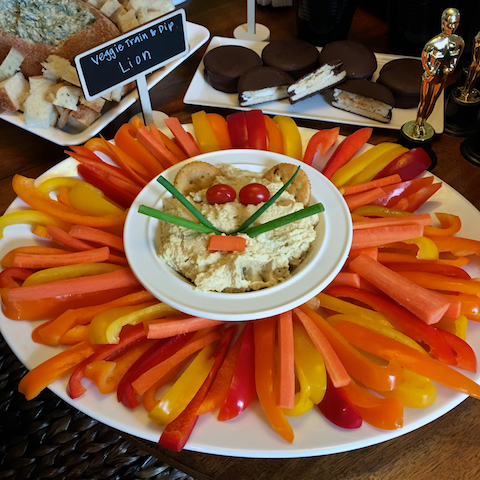 Manchester by the Sea: Lobster Rolls

In Manchester by the Sea, follows Lee Chandler as he returns to his hometown to take care of his nephew after his older brother dies. Due to the fact that the family fishing boat is pivotal to parts of the movie (and in real life is a commercial lobster boat) and the setting in Massachusetts, lobster rolls became the menu item to represent Manchester by the Sea. Great acting, but this one is pretty bleak. 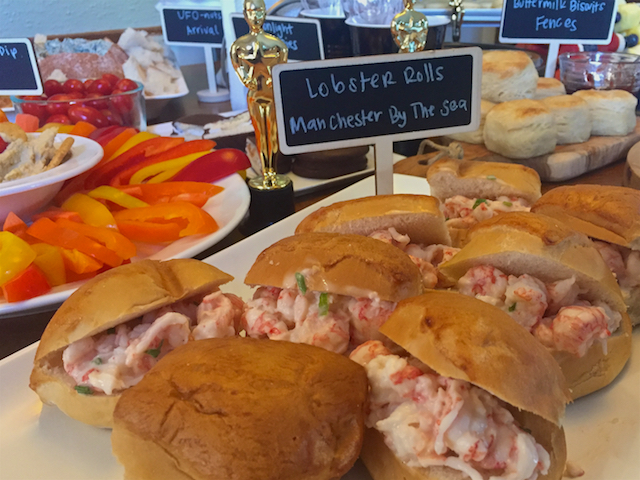 Moonlight follows a young black man finding his way in life growing up in Miami struggling with poverty, drugs and his sexuality. A fun play on the name, Moonlight Moon Pies have no actual significance in the movie. But it’s hard to argue with cookies sandwiched around homemade marshmallow fluff covered in chocolate. Just as good as this year’s Best Picture Winner Moonlight. 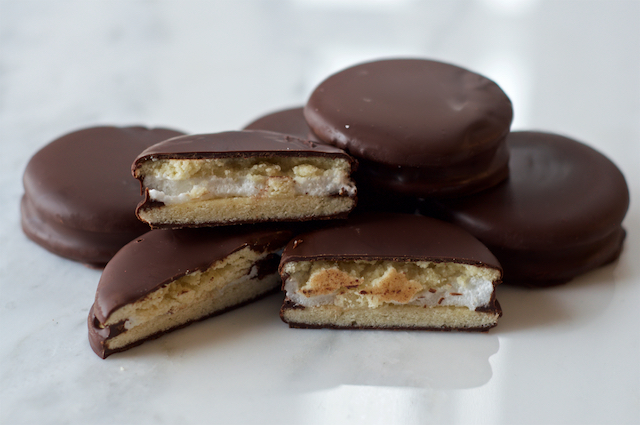 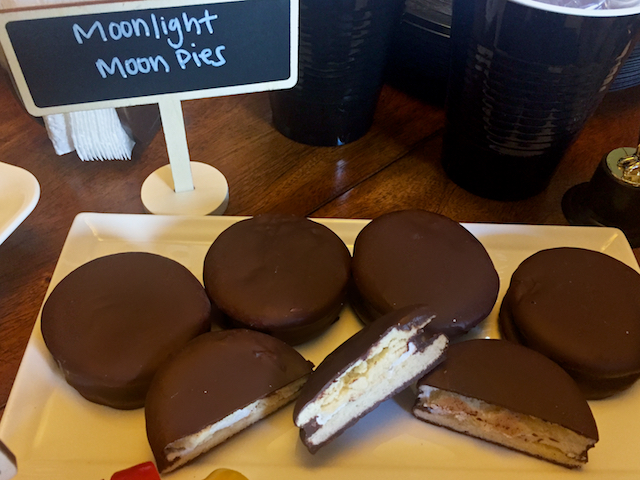 The 2017 Academy Awards made quite the splash in headlines with the Envelope-Gate scandal. La La Land Producer Jordan Horowitz handled the situation with a lot of class as he handed over the Oscar to Moonlight Producer Barry Jenkins. Such a CRAZY ending. And then the internet exploded.

Cheers to all the 2017 Oscar winners! 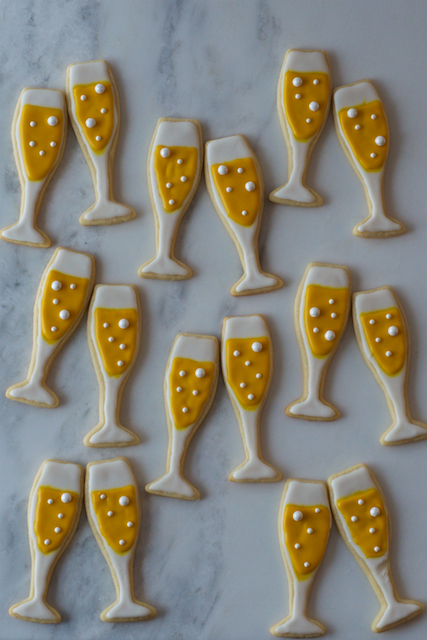 Shout out to Roxy, one of the best dressed of the evening! 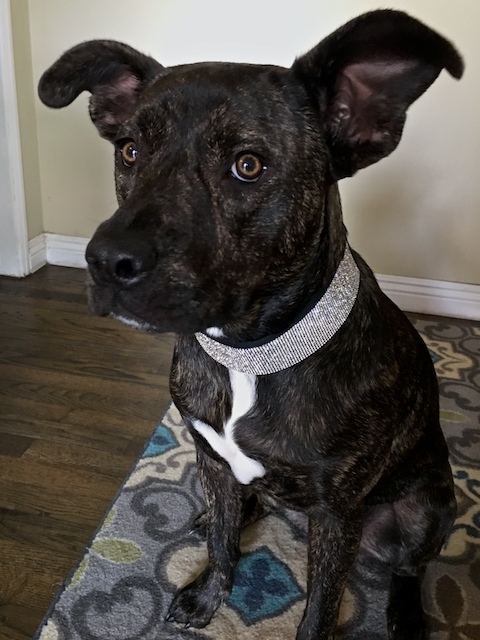 To wrap things up, I wanted to include a throwback to 2010 and the 82nd Oscars. The 82nd Oscars fell in March due to the Winter Olympics. Oscar Sunday happened to fall on my 28th birthday, so it seemed only fitting to throw an Oscar themed birthday bash.

That year was the only other time I’ve created a themed Oscar menu based on the Best Picture Nominees. Menu items were divided up and prepared amongst guests. Featured that year were Up Cakes (Up), Crab Bombs (The Hurt Locker), A Brie C (An Education), A Serious Dip (A Serious Man), Blueberry Avitarts & an Avitini (Avatar), In Flight Snacks (Up in the Air), The Blind Sliders (The Blind Side), District 9 Layer Dip (District 9), Inglorious Little Bastard Pigs-n-a-Blanket (Inglorious Bastard) and 5 Finger Lickin’ Chickin’ (Precious).

Everyone dressed up based on a former Best Picture Winner and we had a press wall. Good times. 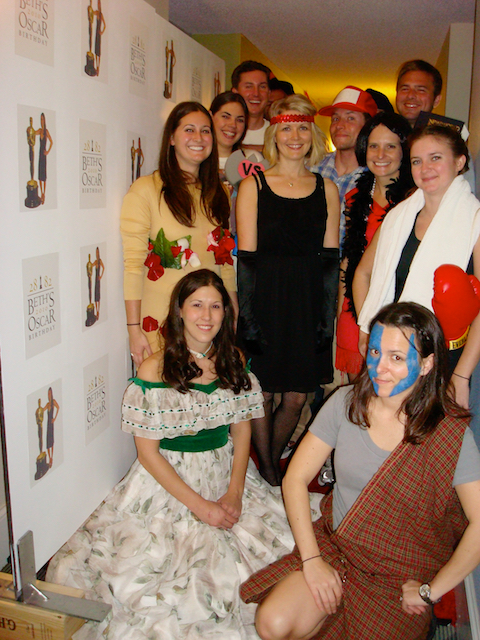 Have y’all ever hosted an Academy Awards party with a themed Oscar menu? What did you include?